Buster’s second birthday was last Saturday.  It was very important to Davey that we get Buster presents, and that we make him a cake.  So after his soccer games, he went with me to buy Buster some presents.

We somewhat hastily wrapped them.  I kinda draw the line at over the top wrapping for a dog no matter how awesome he is (not to mention that my wrapping skills are never over the top for anyone as I am fairly terrible at it).

Davey “unwrapped” the presents for Buster.

Buster wanted to grab them and go play, but Davey wanted to explain each gift to him first. 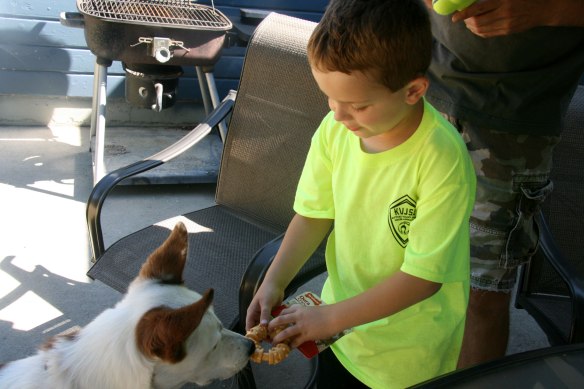 Buster was so patient and sweet with Davey.

Buster will play chase until he falls over so he was happy for some chase time with Davey and his new toys. 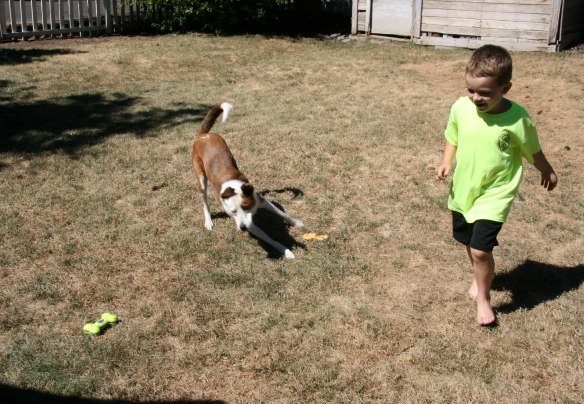 I made cupcakes for Buster’s birthday.  I found a new recipe for a mocha chocolate buttercream.  It was way too delicious.  Of course Buster couldn’t eat that, so I also made vanilla buttercream.

We had friends over for dinner who were kind enough to sing “Happy Birthday” to Buster with us.  Davey also highly enjoyed this.  I wanted to get a picture of Buster eating his cupcake, but I don’t think there is a camera fast enough to capture that.

I just could not ask for a sweeter more loyal dog than Bust-ears.