This weekend Michael and Holly flew down to visit us.  On Friday evening Michael and David went to Memphis, and on Saturday they ran the Memphis marathon.  It was David’s second marathon and he did it 35 minutes faster than his first one!

Holly and I had fun with the baby while they were gone.  I made the mistake of letting him sleep on the couch with me for almost 5 hours on Friday night while we watched a movie and some tv.  That made for abit of a rough night after that, but Holly helped us make our way through it.

I really like this picture of David.  He is three weeks old – which is hard for me to believe.  I can hear him right now on the monitor.  He should be going back to sleep after having just eaten, but I think he’s not too sleepy at the moment. 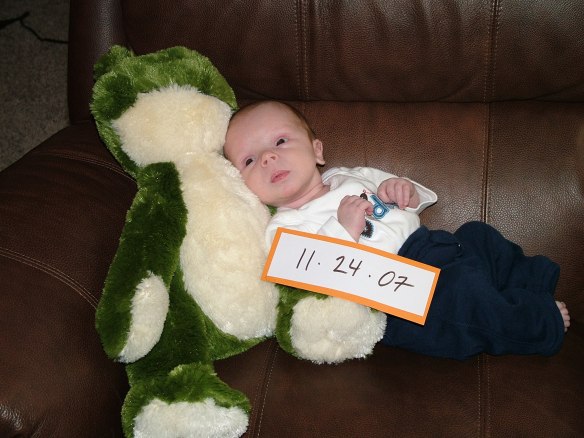 I realized that for us every day is like Christmas Eve with him.  There’s always that anticipation and excitement about what will happen in the next day or week with him.  It’s pretty fun.