We are off to Hot Springs in a little while to go to the library.  It is time for a new stack for Davey.  We’ve had Yo Yes by Chris Raschka this time around.  A simple but great book.  I particularly like it because it brings back memories of reading it to Mikayla when I guess she was around Davey’s age.  And now Davey asks to read it over and over again.

Of course a trip to Hot Springs means a trip to Chick-Fil-A!  Some knitting time for me while Davey plays.  I am getting ready to start the heel flap on the second sock.  Yay!  My other project is also progressing well too!

Davey decided on a yellow beanbag.  Actually he was kind of led to the choice by the saleslady.  He referred to her as the “payer”.  This is anyone who you encounter in a store to whom you give money.  It’s no use explaining at this point that actually she would be the “payee”.  I tried.  🙂  So anyway, he kept changing his mind, and I was in no hurry, so I was just letting him go with it.  The “payer” didn’t have other customers but I can definitely see why she might grow weary, so when he came back to yellow for the 2nd or 3rd time, she said, “OK! Yellow!  Let’s take it outside!”  He was happy with his choice of yellow.  However, he has retired it to his bedroom  for the time being.  It’s a little frustrating for a 2 year old to perch at the top of a beanbag.  We are going to break it in for him.

Happy Library Day!  Oh and tomorrow is Knit in Public Day for me.  I am going downtown to knit with my knitting friends.

I took this picture at Papa Jerry and Pearl’s the other day.   Thought it was so pretty. 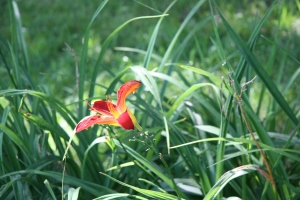 Davey had so much fun playing with the flashlight! 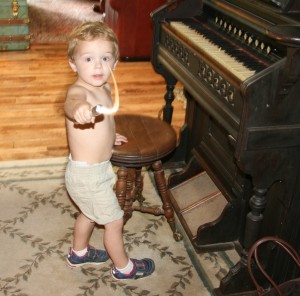