I seem to write lots about Davey and me, or even Davey, David and me, but sometimes it’s just David and Davey.  I teach from 8am to 1:30 pm on Mondays and Wednesdays, so they do all kinds of fun stuff when I am at school.

This morning they went back to the park with the big red slide. 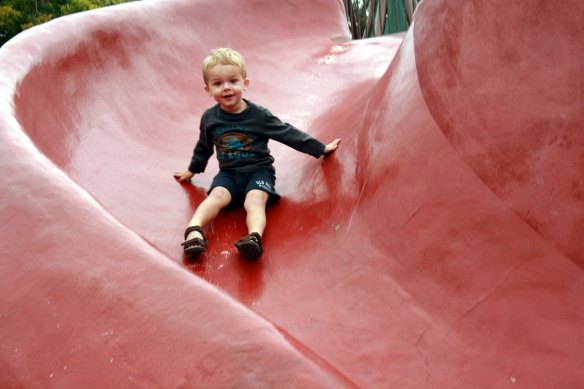 David took some interesting pictures as he went down the slide.  I like this shot of his feet.  At first, I just saw his feet.  Then I saw a cute little kid standing and waiting for David to get on down the slide.

Davey also amazes me how he climbs everything at the playground.  I would have thought his little legs would have had trouble making it from rung to rung.  I’ve been proven wrong several times though:

Davey had fun swinging as well.  I am always thankful that so far anyway, he does not have my dizzy gene.  I can’t even watch him swing without getting nauseous, but swinging doesn’t seem to phase him.

When I got home, we did the switcheroo.  (Thank goodness for schools who work with our schedules!)  David went to class, and Davey and I had an ice cream picnic on the balcony.  Timber wanted in on the action too.  (Lately, Davey likes to pretend that he is “babysitting” Timber.)

Timber’s constant quest for ice cream or just plain mooching never fails to make Davey laugh.  He yells at Timber:  “Scram!  Scram! Scram!”  Then Timber knows he is supposed to get the heck out of the living room and head back to the bedroom.  Timber trots to the room as fast as he can go, and Davey watches carefully to see if Timber tries to re-emerge from the room.  As soon as Timber’s head starts to peek out, Davey’s on top of it.  “MOMMMY!  MOMMY!  TIMBER IS TRYING TO COME BACK OUT!”  Timber and Davey have a good time with this.

Ok it’s time to make dinner.  It really feels like fall today,  I should have made some chili or soup or something.  Instead it’s a meatloaf night!

1 thought on “Daddy and Davey”