I recently knit these: 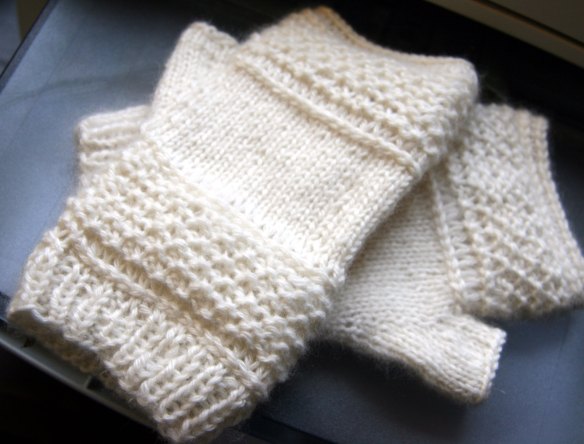 They are fingerless mitts from a pattern called “Treads“.  I made them as a Christmas gift, so when I initially blogged about them, I didn’t include much detail.  I knitted them with cashmere, and wow was it nice to knit with.  So soft.  I hope they hold up well! I learned two new really neat stitches:  the linen ridge stitch, and then the lateral braid.

When I blogged about them, I talked a little about the lateral braid.  It creates a really neat sideways knit stitch.  It was a little tricky to learn, and I never really found much on the internet in the way of tutorial help.  Ever since I wrote that blog post, I’ve noticed that probably 4 or 5 times a week, someone comes to my blog as a result of their search “lateral braid”.  So I thought I’d try to provide a little explanation of how I did this.  I hope it helps.

The pattern describes the Lateral Braid as a Estonian technique.  The author of the pattern first encountered the technique in a Nancy Bush pattern called Fox Faces Socks.  (You can find some description of how to do the lateral braid there too.  In my knitting, I usually find going to several explanations can help me finally figure out how to do something.) In her pattern she also refers to the fact that there are more detailed instructions for this ‘Vikkel’ braid in Folk Knitting in Estonia (1999, Interweave Press) on page 50.  I’d like to find that book.

Anyway, I thought I would include some pictures that I hope will clarify a little bit on how to do the braid.  I thought about doing a video, but I found myself stumbling around and messing up.  Plus it’s not easy with Davey on the loose, not to mention a curious Siberian Husky.  So I am going to try to describe it just with some photos and written details.

I knit these mitts in the round on double pointed needles.  So when you start the lateral braid, you do a make 1 at the very beginning of the round.  I did a M1R because that is what the Treads pattern said to do. 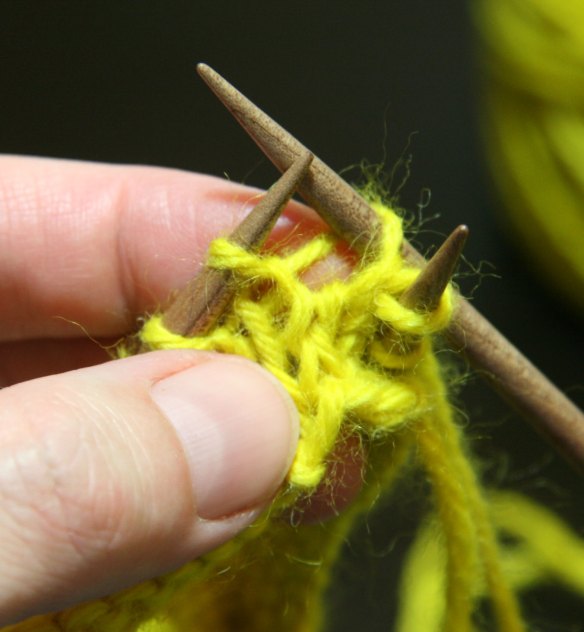 So I make the stitch.  It then is sitting on the right hand needle.  Put this stitch BACK onto the left hand needle.

Now.  Knit into the BACK of the second stitch on the left hand needle.   Like in the picture below:

Ok after you knit into the back of the second stitch,  immediately knit into the front of the FIRST stitch on the left hand needle.  (This is the stitch that you made a few minutes ago, and then slipped back to the lefthand needle.)

After you knit into the front of the first stitch, then you will slip both these first and second stitches off the lefthand needle.

Ok here is where I kept messing up at first, and I was getting this big ole bunched up mess.  You will  have two new stitches on your righthand needle.  Put the leftmost stitch – the first stitch on the righthand needle – back on the lefthand needle.

And here is what begins to emerge. 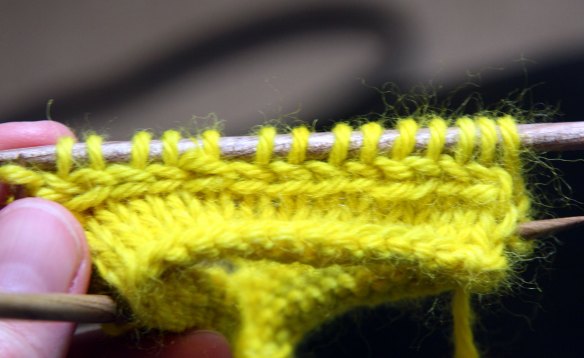 When you finish the end of the round, you are going to have one extra stitch, because you did that increase at the very beginning.  So to get rid of it, just slip the first stitch of the next round (on lefthand needle) back to the righthand needle, and pass the last stitch of the round over that stitch – like if you were doing a bind off. )  Take the last stitch on the righthand needle (the one on which you just did the pass over) and move it back to the lefthand needle.  Now you are back to your original number of stitches and are good to go.

I hope this helps.  Leave me a comment if you need additional help!