We did the neatest thing with Davey yesterday that I want to blog about and remember.   The Junior Symphony Guild in Denver puts together concerts for children, where the orchestra sits in a large circle, and the kids and parents sit in the center of the circle.  It was incredible.

Davey liked watching all the kids.  There were many groups of young children from pre-ks and kindergartens.  He thought they were pretty interesting to watch.  Here we were waiting for the concert to begin. 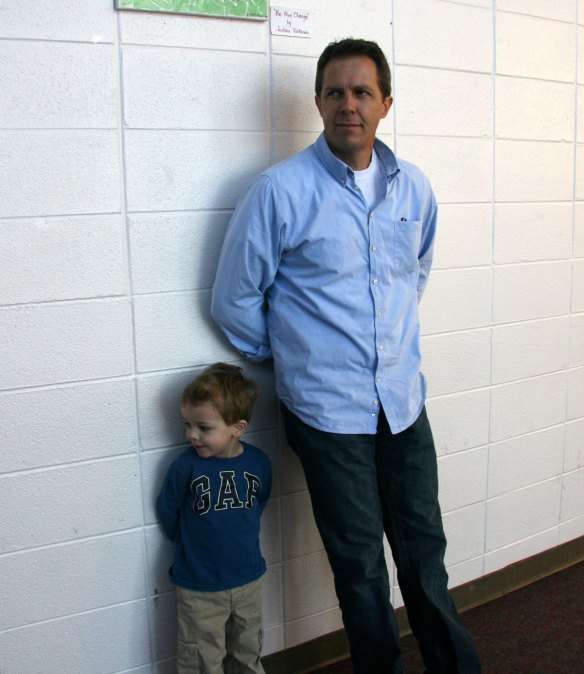 The conductor, “Maestro Jensen” made it so fun for the kids.  He was so energetic and engaging. Some of the music was recognizable to the kids. (“Star Wars” and we rode along to “The Lone Ranger”.)  The kids participated during some of the songs.  For example, the orchestra played “Thus Sprach Zarathustra” by Strauss although most people associate it with 2001: A Space Odyssey.  (Not David – he associates it with the Elvis concert introduction.  I do too actually.)   The kids (and there were probably a couple hundred) all curled up into little balls, and as that music built, they all stretched and stood up and GREW!  Here’s Davey growing as tall as he can!

He was so excited throughout.   An opera singer walked amongst the kids and sang “Figaro”.  A 9 year old incredibly talented little girl played part of a concerto.  During some of the music, the musicians would walk amongst the kids so they could get close up looks at them playing their clarinet, bassoon and bass.

Davey’s expressions tell it all.   Here the concert is beginning, and Davey is stretching tall to see what’s going on up front.

The brass section was behind us.  David heard them playing something here.  See the “face shove”.  It’s the “Daddy look.  Daddy look now!” maneuver.

We’re clapping here, and Davey is just having a good old time.

One of our favorites was “In the Hall of the Mountain King”.  (had to share a link.) Davey loves this and had learned it from “Little Einsteins”.

David and I had as much fun as little Davey did.  Davey’s expression here tells it all for us.

4 thoughts on “Tiny Tots: Inside the Orchestra”