I have to share another recipe.  Actually I kind of made this up yesterday, although I am sure it is not original and that it likely already exists in many forms.  It was a spur of the moment thing for me though, and we really liked how it turned out.

Davey even tasted the soup.  If you consider a couple of licks a taste, and at this point we do!  “MMMMMM, it’s delicious,” he said as he gently set the spoon down and backed away slowly.

So, I already had a recipe for potato soup that I really like.  I got it from my sister.

I boiled about 10Yukon gold potatoes in just enough water to cover them.  I did use organic potatoes as I have been going organic as much as I can lately.  I don’t know if this was a factor in taste.  Maybe not.

I added a can of chicken broth as well.  Then I added an 8 ounce package of cream cheese.  I’ve used the Neufatchel before, but I went full fat last night.

Then I remembered that I had some fresh spinach in the refrigerator.  It was quickly losing its freshness and needed to be used.  So I chopped up an onion and chopped up the spinach, and sauteed them in Extra Virgin Olive Oil until soft and wilty.   Then I added it all to the potato soup.  I added salt and a little pepper to taste.  That’s it.  It was so good!  We finished it off tonight.

Halfway through dinner tonight, I decided I wanted to blog about it.  Well, the light was no good.  No natural light to be found.  The soup was half-eaten, so the bowl was looking a little messy.  But I thought, I have to have some kind of shot.  So here we go: 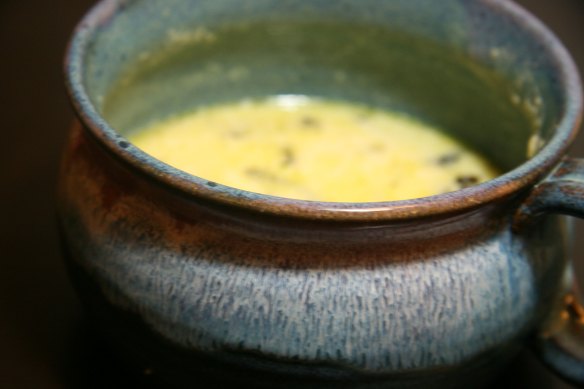 Here’s a pdf for the recipe:  Potato Spinach Soup This will be handy for me as well!

4 thoughts on “Potato and Spinach Soup”