My sister and family left yesterday.  We did a lot of fun things in just a few days.

I have a tradition with my nieces.  We always make cinnamon rolls when they come to visit.  I make the dough and roll it out.  Then they apply butter and cover it with cinnamon and sugar.    Davey joined in too this time.

We made a mess, but it was fun and the best kind of mess.

Davey reunited with Uncle Kev who also became his new Superhero Super Pal.  He had a great great time playing with him.  They read stories,  Kev made up stories, they went to the comic book shop.  It was super fun. 🙂

We climbed Pike’s Peak (or Peaks Pike as David likes to call it). 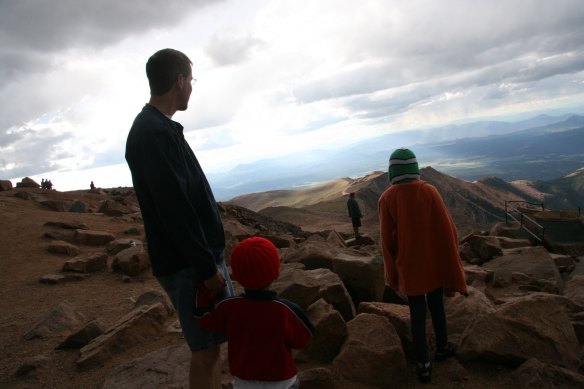 Or better, I should say we rode up the mountain on the Cog Railway.

This was a beautiful trip.  David took what I thought was the coolest of photos.  He said it was a giant bald eagle.

It was actually a big ole black crow.

We made the trip to Breckenridge, and we had a fun afternoon in Boulder.

We also had some time to play around the house, and Davey had the best fun dancing with Mikayla and Jadyn.  He was so excited that we were able to rent “Just Dance” the Smurf version (He is all into smurfs thanks to McDonald’s latest Happy Meal toy).

Koko Puff even wanted to join in the fun.

Davey was having so much fun that he could not be confined to a single spot for dancin’. 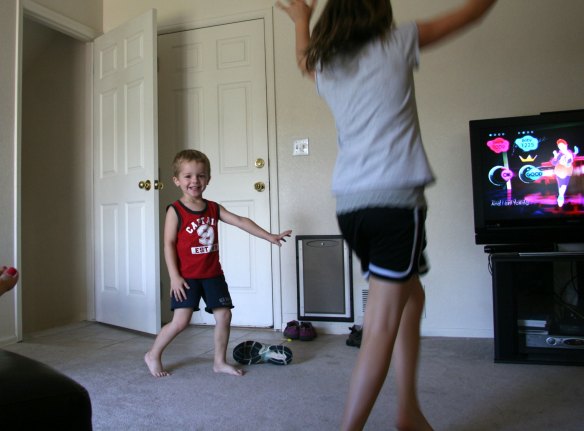 Yesterday morning, they had to begin their trip home.

We made one short stop at an open space near our house so that Mikayla and Jadyn could see a prairie dog village.

I got a few last pictures.  Here Davey is making a run for it!

It’s time now for us to plan a trip to the East Coast!

2 thoughts on “We climbed mountains, made cinnamon rolls, danced…oh and superheroes!”