Today Davey told me that he wants a Surprise Party for his birthday.  He said that he wants to walk in and everyone should be hiding.  I was instructed to hide under the couch (that will be a bit tight).

Then he said that he has to start working on forgetting that he wants a surprise party so that he will be surprised.

So we will try to pull this off best we can.

I wound some yarn this morning.  Here is my yarn swift.

My hands serve as the winder.  This is actually kind of relaxing to do.  It probably saves me time, as I am terrible with a yarn swift.  I have a knack for making a huge tangled mess 90% of the time.

I probably just need more practice.  Maybe I will get one one of these days.

This yarn is Madeline Tosh Chunky.  It is for a hat I am test knitting for my friend for her book.  It is incredible yarn.  Soft and squishy.  It feels great to knit with.  I love it.

Let’s see, oh yes – Davey and I had a lovely picnic lunch outside today. 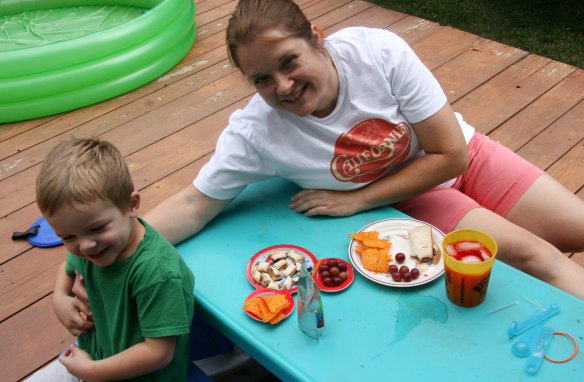 He also decided that he wanted a super squirter.

Unfortunately it was a little much for him to wield. 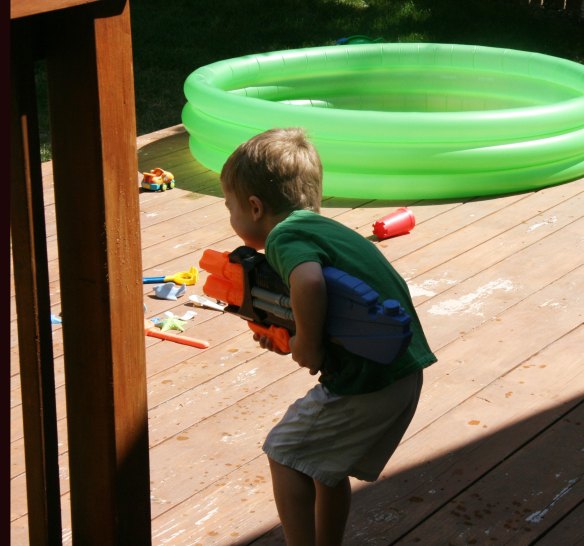 And finally yesterday Davey and I went letterboxing again.  We went 2 for 3.  Two boxes were so much fun to find.  Clever clues and one was in a particularly pretty location.  It was a big open area with the mountains to the west.  Very nice.  The third box had been placed by a bridge.  I think that creek flash flooded at least once this year, so it may have washed away.  Or I just didn’t find it.  Either way, Davey has so much fun exploring the area around where we find the boxes.  One box was under the ridge of a really big flat rock, so we sat there for awhile.  The second was in a park, and we looked at totem poles and walked all around.  It’s enabled us to find new fun places around here.

I could be a spokesperson for Letterboxing America!

Oh and I almost finished my second hexipuff today at McDonald’s.  Davey played at the playland.  We are in search of Smurfette, Gardener and I think his name is Grumpy?  No luck today though.  Apparently Smurfette is a hot item and difficult to find.

That’s quite a mish mash!