Friday night we went to the tree lighting ceremony in Broomfield.  It was a cold evening, but we got all bundled up to go because Santa was going to be there.

Not only was Santa there, but he made a dramatic entrance which Davey loved.   Santa arrived via helicopter.

Davey kept his eyes glued on the sky.

He said, “I think Santa will remember me from the other day!”  (He had spoken with Santa just a few days earlier at Walmart.)  But then, he thought about it, and he said, “but I’m not sure that was the REAL Santa.”

After Santa landed, we got in line so that Davey could talk to him.  Luckily Santa went inside to talk to the kids.

Davey climbed right up onto his lap and began an earnest request.  “Santa, for Christmas I want a Dragon Castle.  NOT the ninja one!” (He has the ninja one.  He likes it a lot, but it’s the dragon castle, that he really wants.)

It was cold.  Check out the red-nosed me. 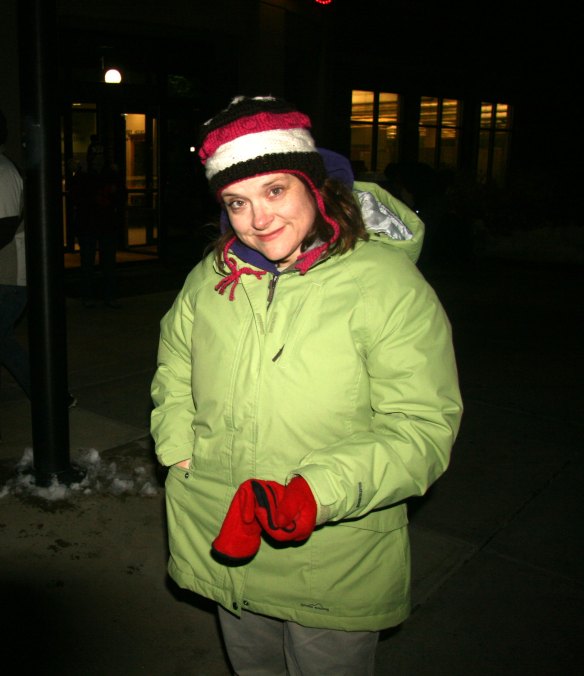 And then we went on a hayride.  We about froze, but Davey loved it.  Then he wanted to wait in line for free donuts.  I gave in with the hope that he’d quickly grow weary of it.  Thankfully, he did!

Christmas time with Davey.  The joy of a 4 year old.  He told me today that his favorite time of the year is Christmas.  I told him it was mine too.  He said, “But Mommy, all you get for Christmas are shirts and stuff.  I get toys!”  True I guess, but he doesn’t know that I had a great time making a wish list on knitpicks today!