A friend told me about a really fun slipper pattern.  The pattern is called Duffers, and it consists of 19 simple rows per slipper. I used almost one skein of Lamb’s Pride Bulky to make them.

This was an opportunity to improve my felting skills.

So here are the slippers right after I finished knitting them, and before I sewed the seams.  They are simple simple.  You sew down the back of the heel and then down the bottom.

After I sewed them up, they looked like this. 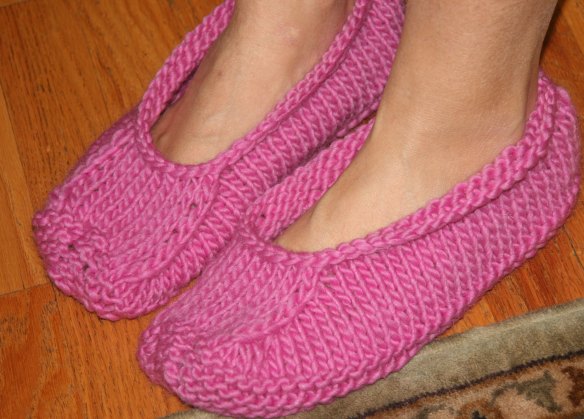 So recently I blogged about the “heart-felt” rings I knitted and felted.  I’d learned from Tiny Owl Knits that I should wring my object out a little and not have it soaking wet.  She also suggested being a little more gentle and not trying to beat up the poor knitted object (my words).

Put that advice with the addition of these:

My sister put me onto this.  These are heavy duty gloves and they serve a dual purpose.  First, I can withstand putting the slipper under very hot water without scalding my hands.  Second, because they are a little textured, they provide additional friction when I am felting. 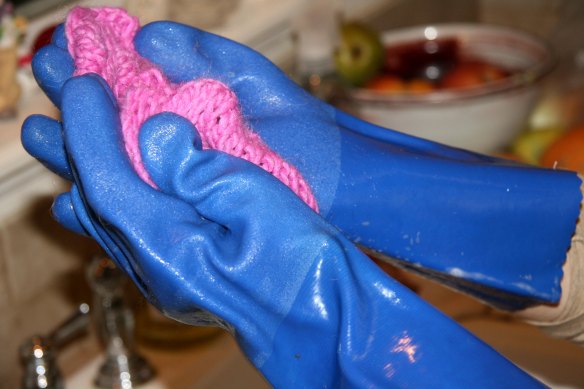 So I put the slipper under very hot water and added just a little dishwashing soap.  Then I squeezed out as much water as I could and did my glove agitating.  I did shock it with cold water one time.  I rinsed it under cold water, and then put it under hot again.  (The “shocking” did seem to speed up the felting a little.) I squeezed as much water out as I could and continued agitating.

It took me about 10 minutes per slipper.

Here is one post felting and the other is pre felted.

The Lamb’s Pride has a little mohair in it, so they are a little bit fuzzy.

Here they are after I finished felting them.

I had not taken a picture which included Davey’s little feet in a while.  Fortunately, this is a photograph and not a video as he was not thrilled to be in the picture.  He cooperated though (barely), and we got it done fast!

I think I could have felted them even abit more, but I felted them to a good fit around my big ole feet.  I wouldn’t mind making one more pair, and I’d felt them even more.  I like that real felted finished look.  I’m not sure I accomplished that.  However, my felting skills are getting much better!

4 thoughts on “Duffers and Hand Felting”