I have been inspired to get busy and finish some unfinished projects.

Last night I finished a hat.  I have made at least 10 of these hats.  It’s the great Boy friend hat pattern.

I’d made a red one for Davey a couple of years ago.  I made it smaller for his smaller noggin, so it’s now pretty small on his now larger noggin.  He agreed to model his new hat for me which I didn’t expect but greatly appreciated.

And a side view!

I made this hat with some acrylic yarn that I had.  Or it might be a wool/acrylic blend.  It might even be Simply Soft.  It is soft though, and it should be warm on his little head.

I also decided to frog what little I had done on the Advent Calendar Scarf.  I took a peek at some of the finished scarves (since the 25 days before Christmas are over now, and ideally I would have been done), and while they are pretty, the sampler look is just not really inspring me.  However, the yarn is, and I hope to start something else with it soon.

I took a few fun pictures of Davey yesterday.  I loved the light behind him, and he was being silly for me. 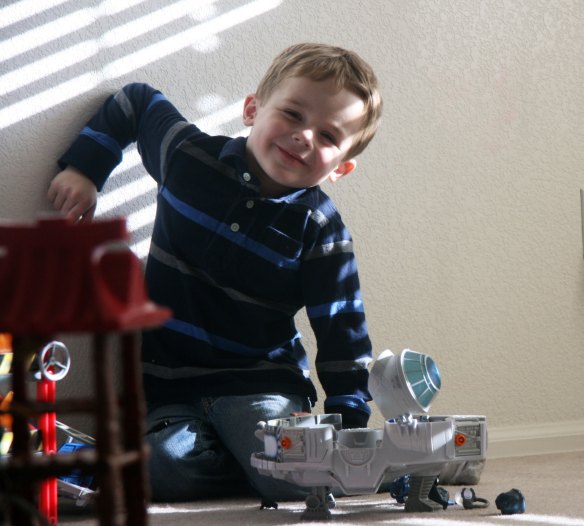 Then not so silly.

He is so busy most of the time.  He tells me about Lucy “my imaginary friend”, and he  moves effortlessly through several alternate dimensions.  There’s “LucyWorld” – of course that is from where Lucy comes.  Then there’s “WinkyWorld”.  There is another land of superheroes as well.

Ok, it’s time to go outside.  It’s been crazy windy here, but it looks like it has not picked up too much yet this morning.