It’s “a-blowin'” outside.  We are hanging out indoors today. Davey is playing with some of his action figure guys.  His imagination has just exploded and I love to listen to all his pretend play (although I pretend to not be listening!).

I think I am coming along pretty well on my third cowl for the Great Cowl KAL.  I finished the first short row section last night and I’ve now begun the second.  It’s all bunched up on the needles, but here’s how it kinda looks right now.

I’m hoping I’m going to have it done by Wednesday evening.

The other night I made potato pancakes.  Over the years, I’d made them a couple of times from this box mix.  They were pretty good, but I grated potatoes and onions the other night and made them from scratch.  This was the very easy recipe that I used: Potato Pancakes.  I don’t know why I hadn’t done this before.  It takes a little time to grate the potatoes, but it wasn’t bad at all.  Grating an onion was not the most fun thing ever.  Chopping up onions does not typically make me cry, but grating them releases an entirely new level of onion fumes.

I knew bratwurst would be good with them, but in an attempt to lower our total fat intake for that meal, I made chicken bratwurst.  I got them at Sprouts.  Pretty good.  Not as good as the real deal.

A not great food shot: 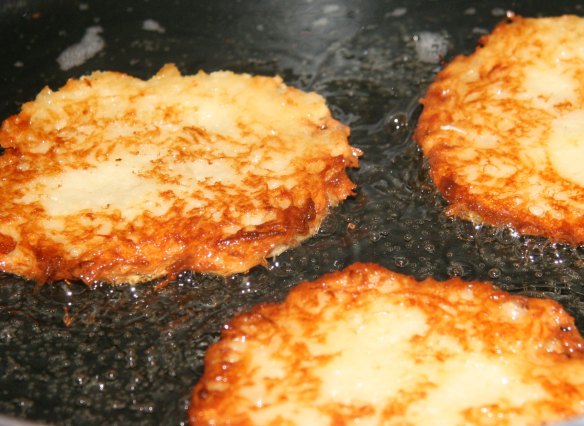 So good.  I love them with applesauce.  David eats them with ketchup (so wrong).

And finally, lately Davey loves to arrange his stuffed animals into “family pictures”.  Then he wants me to come photograph them altogether. 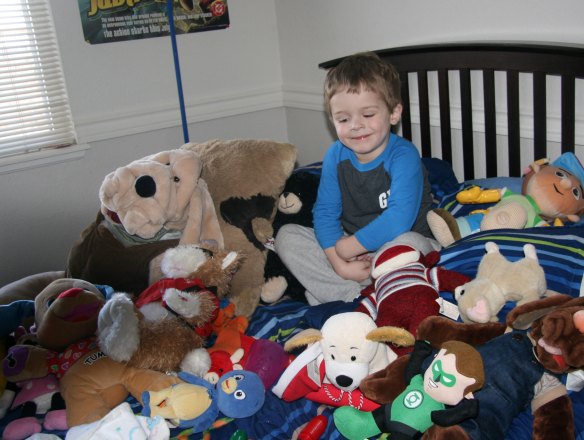