My semester is over and except for finishing up some grading and posting my grades, I am pretty much free for a few weeks.  Yay.  I’ve been getting a chance to knit more again.

I actually finished something yesterday.  Back in November I’d started a pattern called “198 Yards of Heaven”.  It’s a lace shawlette.  I’m happy to have finished it because this is one of those projects that I’d failed on a few times when I was still trying to figure out lace.

I used some Plymouth Happy Feet that I had purchased from Knit Unto Others in Arkadelphia.  I love this yarn, but it’s dk and ideally the shawl should have been done in worsted.  Not necessarily, ideally on the yarn weight – I guess ideally I would have done one more pattern repeat to have made it a little larger.

It will be a great kerchief though I think.

I knit Davey a little bunny “nugget” the other day.  I put it in his Easter basket.  It’s a free pattern by Rebecca Danger.

He’s a cute little fellow and was a quick knit.  Davey likes him, but he is worried because the Bunny Nugget doesn’t have any legs.  He wants legs for him.

And finally – as a reward to me for being just about finished with the semester, I’m finally getting to play with the Mawata (Silk Hankies) that I got for Christmas. 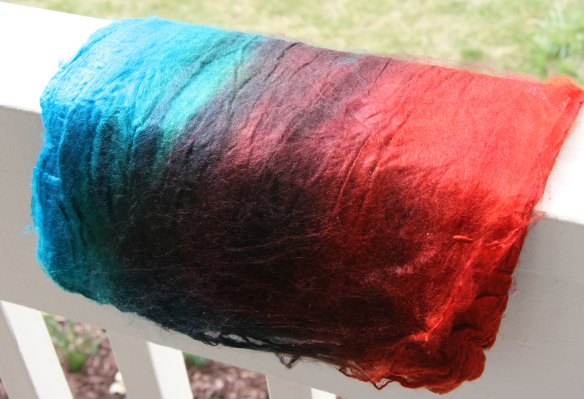 This is a stack of layers and layers of silk.  You take each layer and draft it.  I’m still figuring this out and will post some pictures when I get it a little more mastered.  It’s fun though.  You draft it into yarn (basically put a hole in the middle of the square and then you slowly start pulling and pulling until you get a length of yarn the thickness you want.  The hard part is achieving an even consistency).

We shall see how it goes.