Yesterday was Davey’s first day of Teeball.  I checked the schedule to see when the game started.  10:00am.  We got there at about 9:45am.  Turns out, I’d read the wrong week on the schedule and the game had started at 9:00.  I felt horrible.  Terrible.  I beat myself up thoroughly.  Davey was pretty ok with it  The coach was awesome and let Davey immediately come in and bat.  He was supposed to pick up his jersey when we got there, so we didn’t even have time to get him changed.

So we said hi to the coach, he said, “hey let’s give him a turn to bat!”.  Next thing we knew, Davey was out there with his bat in hand and batting helmet on his head.  Once he figured out where to stand, he reared back and connected for a great solid hit right up the middle.  David was so proud.

So once he hit, then he had to run to first.  (after the coach got Davey to relinquish the bat and then pointing him in the right direction.)

There were parents and coaches galore out on the field to help guide the 4 year olds.  It was very cute.

David was out there to help point Davey to third base.

After he got to third, someone got another hit.  Davey saw it going toward the pitcher, and for a moment he was ready to run to the pitcher mound himself, but then a nice coach guided him home.

He did so well.  He just jumped right in with no hesitation.

After the game was over, we put on his jersey and hat so he could have it on for a few moments with his new team. 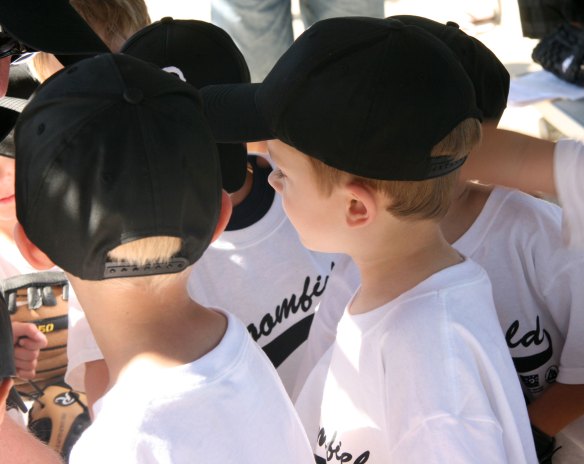 Next week the practice/game starts at 9.  I’ve doublechecked already, and the coach has confirmed it.  At least Davey got out there and experienced hitting the ball for the first time.  That may have been the way to go, but I still wish I’d gotten him there on time.