We are in the process of selling our house.  We have had the “good” problem of quite a few showings so far.  We love that there is interest in the house, but it’s tough to be in out and out of it pretty frequently. It has been nice though having a constantly very clean uncluttered house – that’s a definite plus (although not easy to maintain!).

We had to leave today for several hours.  David, Davey, Buster and I piled into the truck and off we went.  There are lots of nice parks around here, so Davey and David went to the playground while I walked Buster up to the dog park.  He has an incredibly fun time there playing with other dogs.

(Also last weekend, we went to the library and one afternoon I stayed outside with Buster while Davey and David went to the indoor waterpark at the rec center.)

He does not like for me to say Voldemort.  We have to call him “You-Know-Who”.  He frequently refers to Ron Weasly as “Juan Weasley”.  He tells me he prefers “Juan” to “Ron”.  He frequently declares Harry as “The Boy Who Lived!”

While he knows that Dudley Dursley is not very nice, he still did not approve of Hagrid giving Dudley a pig’s tail.  He thought that Hagrid went a little too far.  Davey was worried about the Dursleys not really celebrating Harry’s birthday, and he’s very happy that Harry is getting ready to go to Hogwart’s.

It’s a lot of fun reading it with him. I edit a little as we go, and I’m a little worried that the end might be too intense (I can’t remember exactly how the battle goes), but we can always put it away for awhile.  He’s having a lot of fun with the beginning part of the book, and I know he will enjoy Harry’s arrival to Hogwart’s. 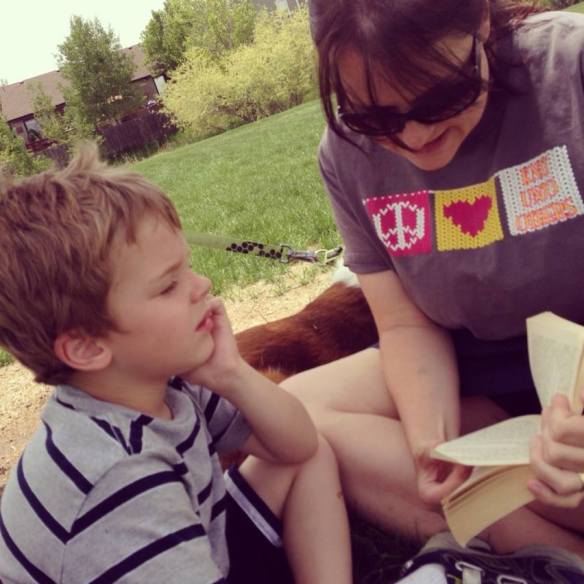 The nicest part of trying to sell the house is lots of together time!