So today we did.  It’s beautiful.  It’s a huge park!  There are seemingly a lifetime worth of trails to hike.  There were also lots and lots of people there (but not in a bad way.  It was just surprising to see so many people!)

We wanted to find just a short hike for Davey and Buster.  We found a great one, but we quickly learned:  “No dogs allowed.”  Dogs are not allowed on the trails in Rocky Mountain National Park. It’s understandable I guess.  There are a lot of people.  Dogs would add a lot of chaos to the mix.  But poor Buster.  We left him with fresh air, and we parked in the shade.

It is a very short walk to the Alluvial Fan.  There is a slight climb, but not more than a little bit of a hill.  It’s just that you feel it more at 8,000 feet.

There were people climbing and crawling all over the rocks along this waterfall.

I’m not sure what’s going on with the limp Davey pose.  Silly kid.

There were lots of great photo opportunities here.

Davey had so much fun climbing on the rocks. 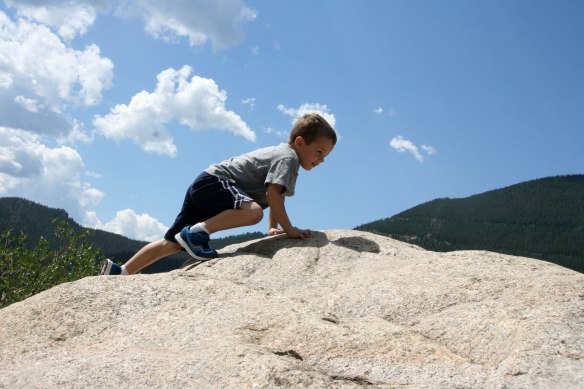 He is pretty fearless and would climb to the top of the biggest boulders.  It looks like he is getting ready to tumble here.  He didn’t fall though; he was just a kid in motion.

Davey’s not much for taking in the view, but even he had to take a second to enjoy the sights.

I love these pictures of him taking it all in for a moment.

David had fun climbing on the rocks too – and striking a pose! 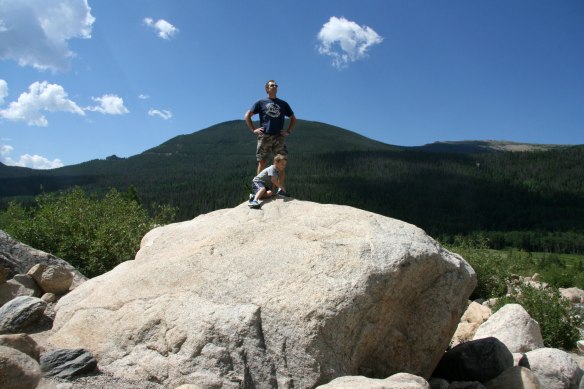 It was beautiful here.  I can’t recommend it enough. 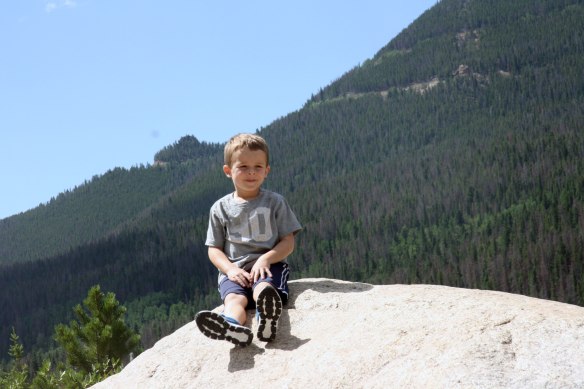 After we were finished in RMNP, we drove back to Estes and had lunch.  Then we took that poor dog of ours, who did not get to go on the trail with us, to the dog park.  Estes Park has a great dog park.  Buster hadn’t been able to run freely since we’d moved out of our house, and he went nuts.  He was so happy, and he sprinted and sprinted.

It’s a dog park with a great view.

We went to Estes Park several times while we lived in Colorado, and we enjoyed it every time.  I was so glad we could go back once more and do just a little exploring in RMNP.