We’ve had a nice day.  It was the three of us here for Thanksgiving dinner.  I attempted to make a real turkey. I did ok.  The turkey was kinda dry.  In past years, I’ve been getting a turkey from Honey Baked Ham.  This year, I didn’t want to drive over the mountains to Bellevue to get it, but I think next year I will.  Still – I’d be happy with just all the great sides that go with the turkey.  I made a cranberry sauce that I really like that comes from the Pioneer Woman.  I made her sweet potatoes too (they are like dessert with dinner!).

Davey even tried just a little of everything.  That was a first.  He helped me make the rolls.  This consisted of arranging two rolls in each muffin space (spot? hole?) in the muffin pan.  He did a great job and was very proud of his handiwork.  They were frozen when he was arranging them, so he had to find pairs of rolls that would fit.  He said it was like math.  He loves math.

We watched the Macy’s Day Parade and the Westminster Dog Show too.

Davey made me a really sweet card.  I love how he “draws” out “I love you”. 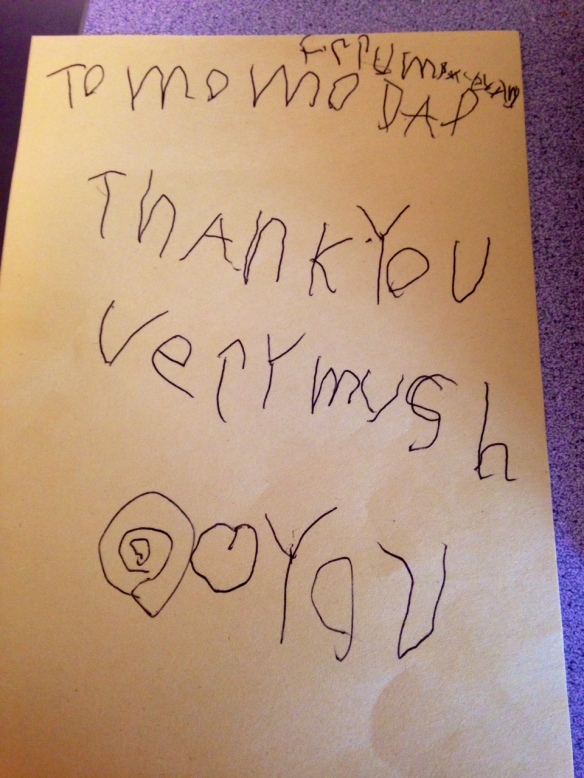 David and I tried to take some pictures with Davey, but he’s not big on sitting still for a picture these days. This is what it is like basically:

It’s a little bit impossible, but we kept at it.