Yep.  Frogged ’em.  I still like the feel of bamboo sock yarn, but this yarn is not meant for a pattern where there is so much texture and stitch definition.  So I have begun again.  I had some Knit Picks Gloss in Burgundy in my small stash.   It is 70% wool and 30% silk.  Going to try that.

I had reached a row in my pattern that I could just not figure out.  I was befuddled.  Thank goodness for Ravelry.  I messaged the author of the pattern. (Her name is Gina House, and she is very helpful and friendly!)  She referred me to a forum where they had been discussing errata for the pattern and in particular, this row!  I can imagine it would be really frustrating to see errors in  your pattern after publish.  But thank goodness for ravelry.  Yeah, said that already.

If you knit this pattern, watch out for row 10.  I will be happy to point you to the errata for it.  There is also errata for the transition row.  I am not there yet so I have no idea what it is about.  However, here’s the cool thing that happens in row 10.   You slip 10 stitches and pass the first one over the other 9.  It is not easy to do, but creates that look of a sheaf of wheat.  Cool huh!  That part I was able to figure out, it was the rest of the row that I was having trouble with.

Luckily I am a “process” knitter instead of a “product” knitter.  So starting over again is of no consequence to me.  Yeah, I’ll keep telling myself that.   But I really minded a lot less than I thought I might.  It was good to test out the bamboo, and now I’ll see how this knitpicks knits up!

And now to Davey.  He is sick.  He had almost a 103 last night.  Now this morning it is back up to 102.  Poor thing.  He’s watching shows and is tucked into his little fold out sofa thing.  Pillow and little blanket and his “tas” (pacifiers) are all he wants at the moment.

We had some fun family/friend plans for the weekend – more this weekend than usual – but it happens. Here’s Davey a few days ago feeling great!  Here’s  hoping he will be back to this in a day or so! 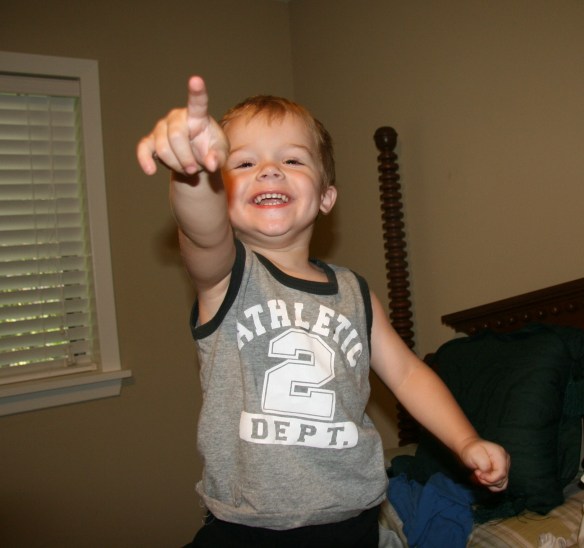