Last night I really wanted to get back to my Boyfriend Sock, but the shawl was calling me to finish it.  It’s been a fun knit, and I only had about 4 rows to finish up.  So I finished it last night and it is blocking some now.

Davey wanted to help me.  Here I was getting ready to start pinning it down, but he came racing over to get into the picture first.

Davey on the move (always!  And it seems like in every photo that I post lately of Davey, he is either without shirt or without shorts.  We do actually put clothes on the child occasionally.) 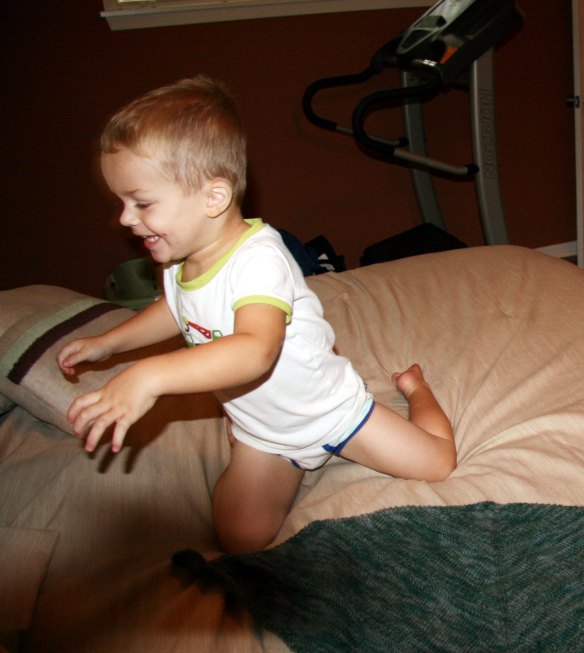 Tried to show some of the texture close-up.  It’s primarily stockinette, but the “switchbacks” are reverse stockinette and 1/2 linen stitch. 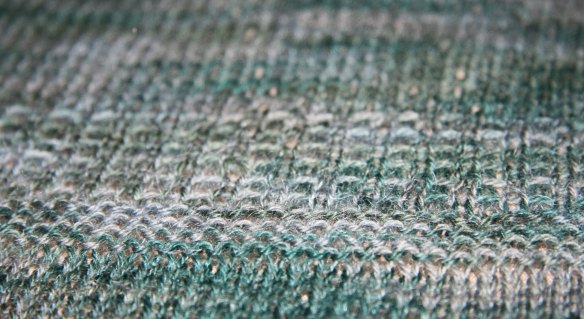 And now it’s blocking.   I hope to enlist David to help me get some good photos  later.

I always learn something with everything I knit.  For example, I can now confidently spell perseverance.  Per + Severe.  I never thought about that.  Then I just have to remember that it is an ance ending.

MIL and MIR.   These two increases have always slowed me down because I have to look them up every time.  Pick up the increase from the front or the back?  Then do you knit the front of the back of the stitch.  I could never remember.  Doing these 4 times every other row throughout helped me really get this down.  At first I figured out a memory trick.  This may seem silly, but these kinds of things work for me. For the Make one Left (MIL)  – I remember a blood test for liver function called LFT.  So whenever it was time for a MIL, I’d think LFT.  Which to me meant pick the Left up from the Front.  Then I’d have to knit in the back because it was always the opposite.  That sounds crazy and convoluted and probably makes sense to  not a person on the planet but me.  But it worked for me.

I also love the look of linen stitch.  I love the triangular shawl – with the ridges.  As the designer described it – the ridges are like switchbacks on the mountain.

Now back to my boyfriend.