Today’s been a fun day with Davey.  David had an all day meeting.  So Davey and I went shopping and exploring.

First, I finished my sock.  I have been mildly irritated with this sock.  I wasn’t sure how I was going to like it.  Now that I finished it though, and put it on, I like it very much!  I am still not a big fan of twining, and there will be less twining on the second one.  I also made one other change.  I didn’t decrease the toe down as far as the pattern called for.  The pattern called for pulling the yarn through the stitches to draw the toe together at the end.  I really prefer kitchener stitch and not such a pointy toe, so I decreased to 28 stitches and grafted.

It’s such a crazy combination of colors and patterns, but I like it.  I took a picture with Davey too.  His feet look just about the same size as mine here: 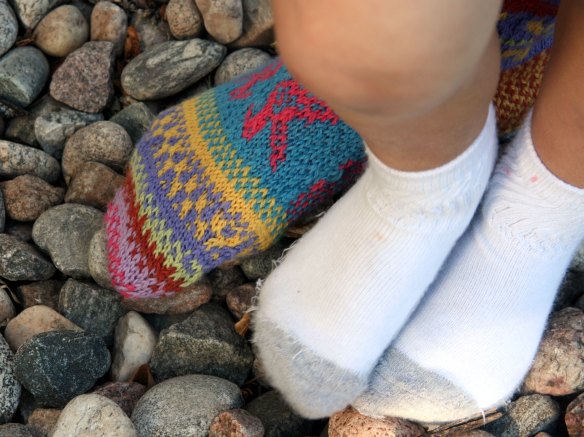 One down, one to go!

So Davey and I went to Kohl’s today.  We went to Hobby Lobby.  We went to Chick Fil A where he ate great, and he saw the big Chick Fil A cow guy.  The guy was very large in his costume, so Davey didn’t want to get too close.  He waved from afar.  He also asked me how the cow guy was able to drive because his feet would be too big to drive a car.

Then we went to Target.  After that, I thought I’d figure out where the nearest yarn shop was.  Because I have not joined the 21st century with some kind of web access on my phone, I borrowed some yellow pages at the Target service desk. I had not used yellow pages in quite some time.  The nearest shop was in downtown Littleton, so Davey and I headed there.  It was a beautiful shop.  They have lots of great yarn, but the entire time we were there, Davey was saying mournfully,  “I miss Ms. Claire.  I miss Ms. Claire”.  (the owner and our friend from the Arkadelphia knit shop.)  I told him I miss her too!

He was really patient with me though.  We strolled around there for abit and then went to a little bakery/tea shop a few doors down.  It was the cutest little shop.  Davey and I sat down and he had a cookie and apple juice, and I had a blackberry scone (really good) and a chai tea latte.  While I was enjoying my tea, Davey was blowing bubbles in his apple juice.  He insisted that he was making music.  So he serenaded me while I had my scone and tea.  It was a nice time having tea with Davey.