Davey will sometimes say “It’s a lovely day” just out of the blue.  He may have learned it from Maggie and the Ferocious Beast, but I still like when he says it.

Today has been a lovely day.  We had a picnic at the park.  (David had to run to school and he brought us back a pizza.)  Then Davey and David played at the playground.

I like this picture because even though you can’t see it too well,  David is laughing here about something.

I knitted on Davey’s hat while they played.  It was hot here today, but it still felt ok in the shade.  This is a red hat, but it really looks red in this photo.  I am getting close to decreasing and finishing it up. 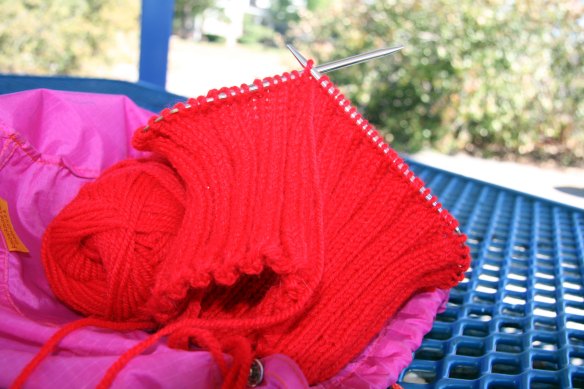 After we left the park, we decided we’d go to the Denver Aquarium.  I am so glad we did.  What a fun place.

Once we got in though, he alternated between enthralled as shown here – 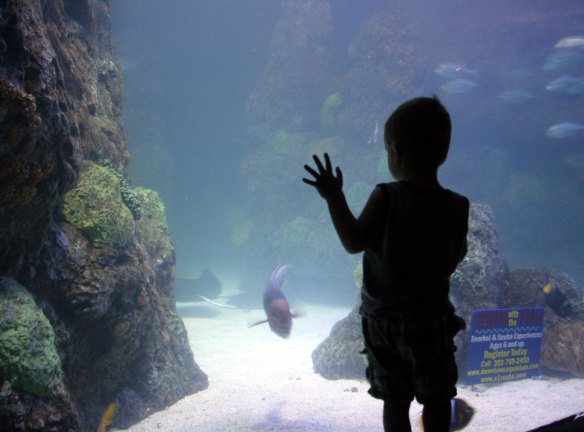 When he was somewhat terrified, he wanted one of us to hold him.  David did most of the carrying.  When Davey was somewhat terrified, he also made very funny expressions and squeezed our necks really hard.  This is why I say he was only somewhat terrified as he kind of enjoyed being “scared”.  There were a couple of times though when he did get a little worried.  The big sharks were a little scary.  And the tigers did kind of freak him out.  Tigers at an aquarium?  Yes, a very awesome exhibit.  Three tigers in a jungle settling.  Then to make things more exciting, one of the aquarium staff was carrying this around:

A tiger skin (pelt?)  She carried it outside where we were, and one of the tigers was just going nuts.  He ran back and forth and jumped up on the glass at this thing.  Kids were running back and forth to see this.  It was chaotic, and it could not have been good for the tiger?  I don’t know, but it was incredible to see him move.   Powerful is not enough of a word.  David said the tiger viewed us all as a nice snack.  He was beautiful though.  Davey liked the tigers but at the same time was telling David, “Don’t get too close Daddy!”

So the aquarium was well worth the trip.  They simulated a flash flood in a canyon in one part of the aquarium.  It stormed and got dark, and then here came the water.  Spooky but fascinating.   Davey only found it to be spooky.  He asked David to move move move out of there.

As we left we took pictures with shark statue guy.  David got into this more than Davey did.

On the way home, we stopped for Dairy Queen.  A lovely day!