Several years ago, and I think it was quite a big several, I bought this hat. 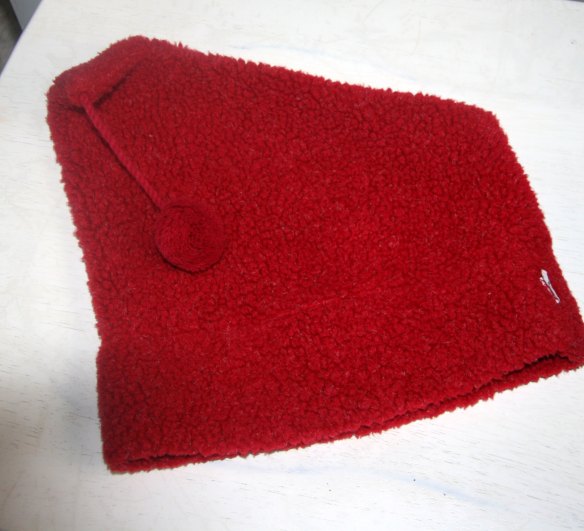 I got it somewhere in Colorado or New Mexico. I can’t remember now.  I always liked it.  David calls it my elf hat.  But it’s not really very comfortable.  The seams always start to itch after awhile.  The hat is made out of some kind of fleece stuff, and the inside of the hat in general is kind of uncomfortable.

So I decided I wanted to figure out how to knit it and make it myself.  Since it has those straight edges, I am going to knit it flat and sew it together.   I am thinking I will just do garter stitch.  So it will involve knitting only and then a gradual decrease on 2 sides.  (That’s the only part that might hurt my brain a little to figure out how to do that.)

I’ve got a little pom pom maker that I got at Hobby Lobby last week.  I am looking forward to trying out.  I am not the greatest at homemade pom poms.   I’ll probably try to attach the pom pom to the hat with an knitted i-cord?  Not sure yet.

So I wanted to get a better picture.  I really like this hat.  It’s kind of big and roomy and warm!

First I did the old take a picture of myself in the mirror.

That didn’t do much for me. So then I enlisted the aid of Davey.  He wasn’t much interested in pointing the camera at me.   He got one shot that was ok.  The light is not great, and it is blurry – but Davey took it so it’s precious.

Then he just went nuts with the camera.  He started pointing it everywhere but at me and clicked as fast as he could.  I tried desperately to get into the picture. (As usual, there’s curious Timber in the background.)

Finally, David came to my rescue and helped me out.  However, the picture was kind of close-up, and I was feeling rather sloppy, so I did some generous cropping.

So that’s the hat in enough detail I think.   I am going to knit it in a purple Cascade 220.  The first draft anyway.  We shall see.