This morning we decided we’d go exploring  (We are out of school for a couple of weeks).  So I googled  “Boulder –  hikes for children”.

I came up with what looked to be a great 1 mile loop at Bald Mountain outside of Boulder.

I printed out the directions and the map.  Davey loves to study maps so he immediately took that off my hands.

A nice thing about where we’ve moved is that we’re pretty close to Boulder so it wasn’t far to drive over.  We went through Boulder and followed the directions which began to lead us up a switchbacky mountain.  We somehow missed the turn and had to go back down the mountain where we finally found the Bald Mountain trailhead.

It was pretty desolate out there.  Beautiful though.

So we began our hike.  We walked a little bit up the hill.  We were not yet out of sight of our car.

Now – I am used to the coyote warning signs which are posted all around the open spaces areas by our house and formerly by our apartment.   And – I blogged about this – I met up with a coyote one day.  We were 40 yards apart, but I did see one.   So…I take these signs seriously.

The sign said: “Mountain Lions have been sighted around this area and they present a threat to visitors and their animals.”

Now the sign also said that the chance of seeing them was “slight”.  I never even noticed that part of the sign until I downloaded the pictures from my camera once we got home.

I was too busy skimming on down to the part where it advised me to “Never run from a mountain lion.  To fight back.  To never turn my back to a mountain lion.” And – “throw stones and sticks if the lion acts aggressively.”

Davey took one look at the sign and said “Wildcats!”

David continued by explaining how the mountain lion will watch his/her prey for a long time.  Silently.  Then suddenly when the time is right – he will take a couple of long jumping strides and pounce.  David added that the mountain lion goes for the back of the neck.

We pretended to ponder the situation. 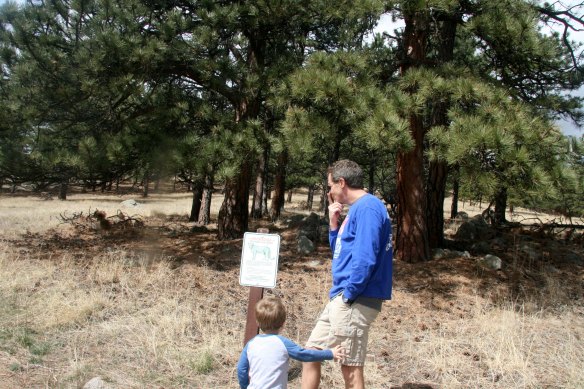 Then we hightailed it back to the car.

We had Davey sandwiched between us.

I’m pretty sure there was a mountain lion behind these rocks (or maybe he was in the tree). 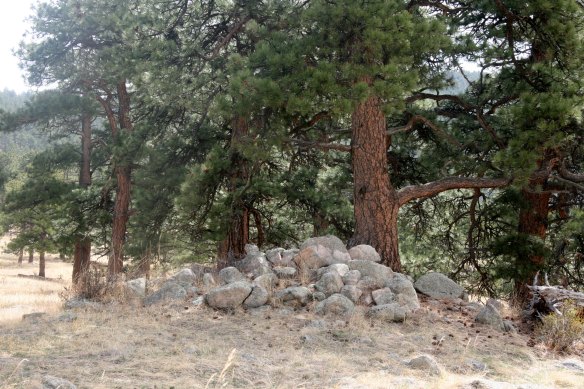 Lunch and then the  park.

The wilderness ain’t for wimps (me).

4 thoughts on “Morning on Bald Mountain”