At the beginning of this year, I bought one of those little stitch pattern of the day calendars.  Vogue stitches maybe?  I can’t remember for sure.  But each day is a different knitting stitch or fair isle pattern.  There are so many beautiful ones.

I have all this yarn that I am bound and determined to knit up.  So I decided that I would try to take some of these stitches and figure out a pattern to use on some of my yarn.

I liked this stitch pattern called the Eyelet Rib. 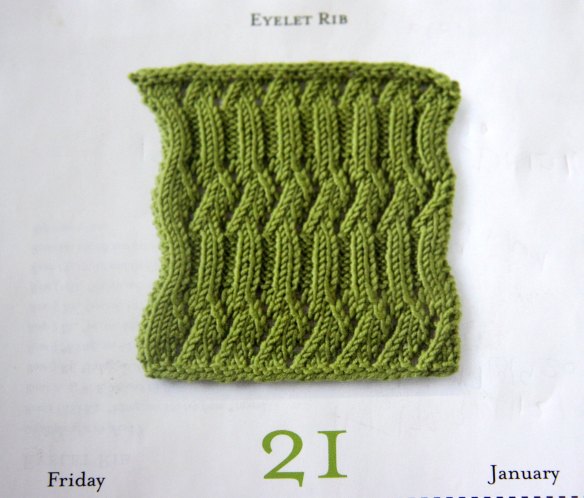 I decided to take a basic fingerless mitt pattern and incorporate this stitch pattern.  It worked pretty well.  I used Cascade 220 Heather yarn and size 7 needles.  I ended up with a pattern stitch that looks quite abit larger in gauge then the swatch from the calendar.  I am not sure I do the rib justice, but I think they turned out ok.

I finished the fingerless mitts this morning.  I wanted to photograph the mitts, so I could put them on ravelry and blog about them.  So I went outside with Davey, my camera and the mitts.

I was hoping he could help me.  I know he is just 3 and 1/2, but he is pretty good at wielding the camera and can come up with some random neat shots.  He’d also tried on the mitts earlier, so I even thought he could model them for me.

He was having none of it.  He was too busy “fishing”.

This is kind of another story in itself.  Two Christmases ago, I was playing around with knitting some ornaments.  This is an ornament that I never finished.  Somehow it got mixed up with Davey’s toys, and this semi finished ornament is something he often plays with. (It’s just a semi-stuffed knitted sphere.)

So anyway, I was on my own as far as the photography went.

Then I tried holding the camera down low and “shooting” from the hip.  Not so good either. 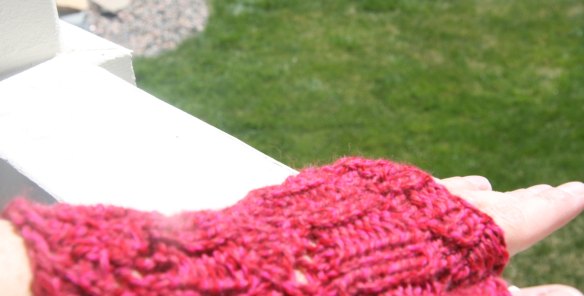 I wasn’t too happy with the photos.

Then David came home and saved the day. 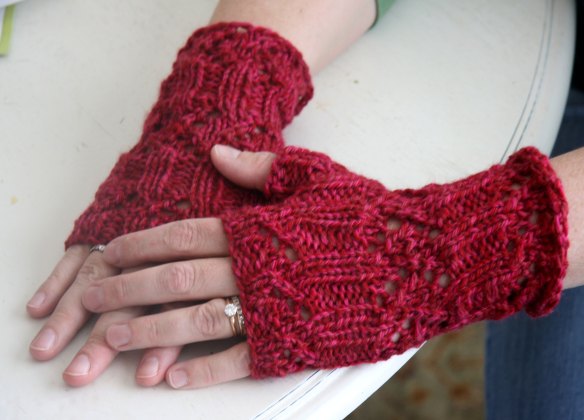 I’ve written up this pattern.  I’m not sure I’d knit these again.  I think I might try them with a finer smoother yarn to get more of the look from the stitch calendar, but I guess there is no reason that I have to duplicate the look.

If I am going to write the pattern though, I’d better do it fast.  I’ve written it down by hand.  But there’s a problem.  For some reason, I felt no need to write the pattern in any even vaguely linear fashion.  I don’t understand why I did it this way.  I mean it makes sense to me.  Today.  In a week?  I kinda doubt it.