Yesterday, we went to a enrollment party at the Little Gym.  Davey was having a great time.  They were doing some group activities, and each time they did a new one, they’d call all the kids to the mat.  Well, Davey always runs pell-mell just as fast as his little legs will carry him when the instructor calls. This time he tripped on the mat and went down.  He came up holding his ankle.  Poor thing, it really hurt him.

His ankle didn’t swell.  It didn’t bruise, but Davey could not put any weight on it.  We decided to watch it last night to see how it looked in the morning.

This morning, we decided we’d better have him checked out.

Davey had told us that it only hurt when he walked on it.  I could rotate it around.  I could put some pressure on the side.  “It only hurts when I walk on it Mommy.”

So we were in with the doctor.

Doctor: “Does it hurt when I touch here?”

Doctor: “Does it hurt when I move it like this?”

Doctor: “Does it hurt when I move your toes?”

Davey: “It only hurts when I walk on it.”

You get the idea.  Davey patiently answered “It only hurts when I walk on it.” to every question.

We went to x-ray.  The doctor didn’t really think they’d find anything, but he wanted to be sure.

Unfortunately they did.  Davey has a buckle fracture on his tibia.

He’s taken it all quite well.

His only request?  “Smarties and M&Ms”.

So he’s had some Smarties.

And some more Smarties. 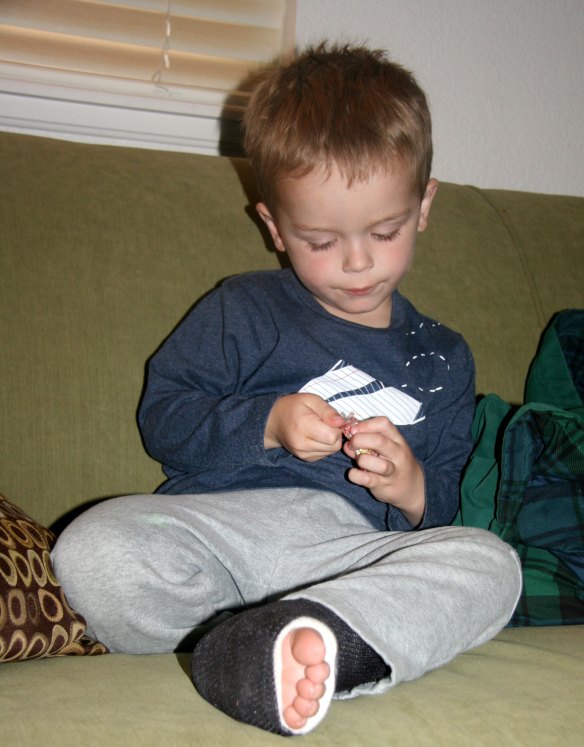 And when I asked him for a smile, he was back to his goofy self.

He has to wear the cast for 3 weeks.

I just heard him ask David, “Daddy, when I can I take this thing off?”