Davey and I went exploring at a park not far from our house yesterday.  There’s a small lake and lots of birds (and turtles we were told.  We looked, but we didn’t find any turtles).  We also noticed an area of tall trees that had been blocked off with orange fencing stuff.  A lady saw us looking and she explained to us that they were protecting an owl family.  There is a mommy, daddy and 3 baby owls living there.

We found the owls.  I tried to take a picture.  I drew the arrow in because I couldn’t zoom in the way I wanted.   (We are looking forward to buying a better zoom one of these days!)

Anyway that owl is just a couple of months old.  He seemed really big to me already.  Of course, I have no idea how fast owls grow up.  We’re going to take David over there, and we’ll bring some binoculars to get a closer look.

Similarly, I had no idea about this duck. 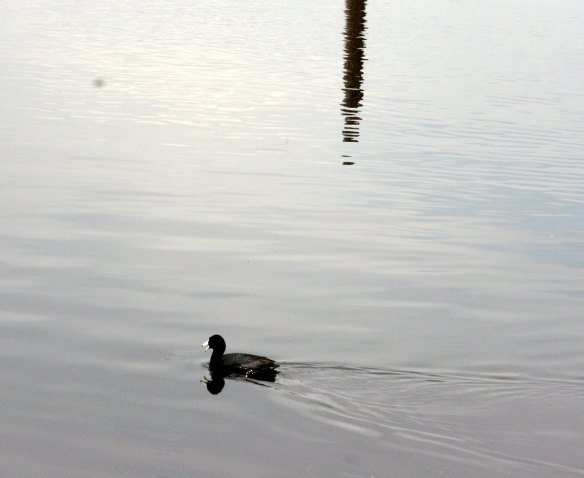 There were two adult Canada Geese nearby, so Davey quickly determined that this duck was their baby.  I felt that this was probably incorrect, but since I don’t really know much about black ducks, I figured I’d go with it.  Again, need better zoom – but isn’t he pretty with that white bill?  We’d not seen one like that before.

Broomfield does nature walks for preschool kids.  We’re going to go on some.  Davey needs someone knowledgeable to navigate him (us) through these things.

Of course in any exploration outing, snacks are crucial.  “Mommy!  What did you bring us?”

Yesterday it was Capri Suns (Pretty Suns as he calls them) and some M&Ms.

Davey enjoys exploring.  Yesterday he kept looking for ants.  He also told me that “mean people catch frogs”.   I don’t know where he got this.  (He also told me that coyotes eat little kids.  He apparently learned this from one of his little friends.  He was pretty casual about sharing this with me though, so I’m thinking he was not convinced that this was true.)

It is a beautiful morning, so I’m getting ready to pack us a lunch and we are going to go exploring again.   Need to avoid sandwiches though unless we want to gobble them down.  This mountain air dries out a sandwich like nothing I’ve ever seen.

2 thoughts on “Baby Owls and M&Ms”