Tonight I went on a secret mission.  Replace Winkie the Rockstar Bear.

Winkie went with us to Omaha.  I took this photo shortly after our departure from home. 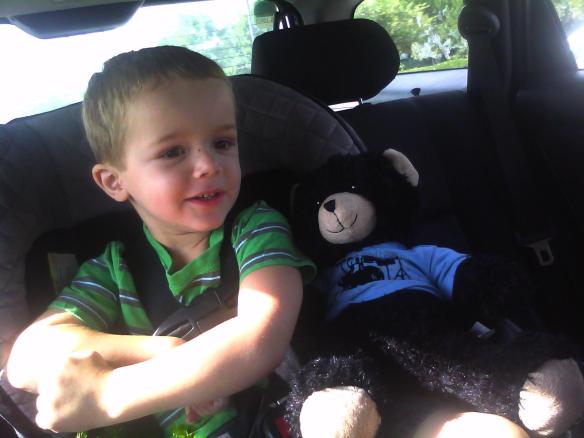 We returned home last night and we realized that Winkie did not make it back.

I called the hotels where we’d stayed.  I have a feeling he might have been left lost in the sheets and bedspread in Lincoln.  Nobody seems to have found him though.

Davey was looking for him last night, but then he fell asleep.  Davey loves “Wink” (he recently gave him that affectionate nickname), but he can fall asleep without him and he is not desperately attached.  However, I knew he would not be happy to lose Winkie for good.

We decided to replace Winkie.  So tonight after dinner, I made a quick quiet trip to the mall.  Davey’s Pa (David’s dad) arrived today, so Davey barely noticed that I’d left.  They all went to the playground and I headed to Build-a-Bear to purchase a new Winkie.

Somehow Winkie’s blue shirt was still in the car.  I don’t know exactly how Winkie lost his shirt.  So new Winkie has on the old shirt.  I gave him to Davey and he didn’t notice at all that this was a new Winkie.

I debated all the way home as to whether I was pulling an elaborate trick on the poor child.  I don’t like the idea of that at all, but then on the other hand, is Winkie a homogenous good?  I mean the new Winkie is exactly like the old Winkie.  There is not a lick of difference.  Old Winkie was not really very worn at all.  So I have tried to convince myself that Winkie is a homogenous product (This took me back to some business class that I had in OSU.  I knew this would come in handy one day).

So I still don’t feel too good about it, but for now I guess I will let it go.