Davey has been enjoying his “splash party” this weekend.  It certainly has been a hot weekend to break his water toys in.  102 here today.  Apparently a record for Denver.  So we have been covering ourselves with sunscreen and venturing out for part of the afternoons. 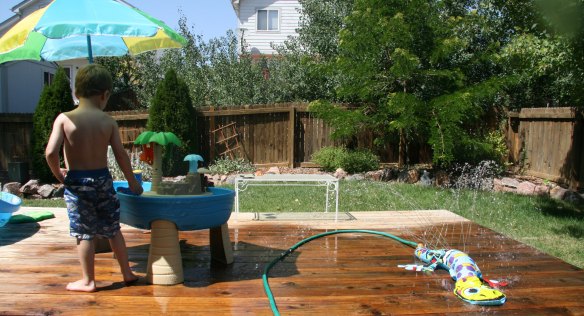 As requested, he now has his kiddie pool, water table and gecko sprinkler.  He has been having a good time.

He becomes very immersed in his play.  Total focus.

I took a close up shot of him, and I noticed he’s collecting more freckles every day. They are cute on his little nose.  I was kind of hoping that he would have David’s darker tannable skin over my pale freckly skin, but maybe he has some nice combination.

He and David played more this afternoon.  I like this shot of the two of them.

And a Davey grin.

I also brushed up on my crochet skills today.  My sister in law saw some “barefoot baby sandals” the other day on etsy.  I’d never seen them before, but they are pretty darn cute.  I found a pattern on ravelry, and I made a couple of pairs today.  Thank goodness for google, as I’d forgotten exactly how to do a couple of stitches. 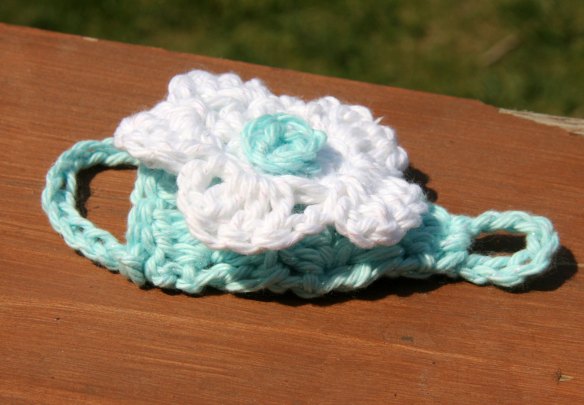 They are so much cuter being modeled on a chubby baby foot.

So they just go on the top of the foot.  The front loop goes around the second toe, and then the back goes around the back of the foot.  I guess that might be self-explanatory.  I was tempted to knock on our neighbor’s door to request their 6 month old as a model, but I don’t know them well and figured they’d think I was nuts.

I used cotton to make these.  There is a sparkle in them too although you can’t see it in this majorly sunny photo.

I tried a different type of flower on this pair.

Pretty cute. Holly, if you read this, feel free to tell me if you want a different color or flower style!