Pug Pieces.  I know that just doesn’t sound quite right does it.

I’m knitting a little pug for a cousin/friend who loves pugs.  He sent me the book Knit Your Own Dog.  Also included in the title are the words “Easy-to-Follow Patterns”.  I am not completely in agreement with that part of the title.  This pug pattern is not the easiest in the world.  So far I have these pieces: 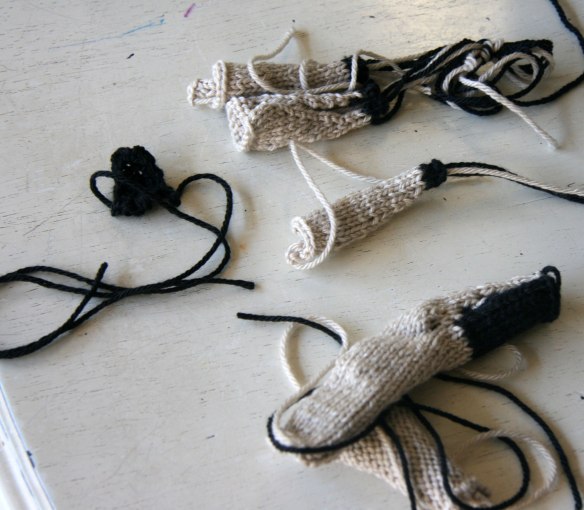 These are not all the pieces.  There are two ears, two eyes, two front legs which are knitted a little differently than the two back legs, a right side body/head piece, a left side body/head piece and a tummy tail piece (which is a long piece which will extend from under the chin to the tail.)

It’s really a cool pattern.  There is such attention to detail to get the pug anatomy as realistic as possible.  And overall, the pattern is pretty easy to follow.  However, I had a little difficulty with an abbreviation called PULT.  It stands for something like pick up the lower loop.  There are short rows in the body around the head (creates kind of a wrinkle for the pug head).  So this was their recommended technique for when you do the short row turns.  Before you turn, you grab the loop below on the next stitch on the left hand needle.  When you turn, you knit the loop you picked up together with the next stitch.  This prevents the formation of a little hole resulting from the short-row turn.

I just couldn’t quite visualize this, so I spent some time on ravelry and looking for youtube videos. I found one video where a person demonstrated the PULT, but the part I didn’t understand was the part that she kind of zipped through on her needles, so I was still confused.  I did figure it out though.  And it was a fun challenge, but not for a brand-new knitter I’d say.

(It turns out that in their subsequent book, Knit Your Own Cat, they substituted the wrap and turn for the PULT.  That I have done, and that should make this part easier.)

Then there is a part on the head where you have to change colors between the black and the tan.  I’d have appreciated a little guidance here as I’ve never knitted intarsia and I think this was an intarsia like area.  A more experienced knitter might have just understood what to do here.  I need to study up on some intarsia basics.

So it’s a challenge.  And then there will be the challenge of the assembly.  My next worry.  I hope I can pull it off!

So that’s the story of the pug pieces.  (I do appreciate the attention to detail in this book, and I really want to make the Siberian Husky!)