Yesterday Davey and I took Buster for his first bath.  David and I had many years of giving the dogs baths in the backyard or in the tub.  It always involved a lot of bending and pain to our backs.  So when I learned about the “Self-Service Dog Wash”, I was ready to give it a try!

Davey and I went to check it out.  It was great.  The tub was elevated.  They provided shampoo, conditioner, towels, aprons (for Davey and me – but we didn’t really think we needed them.  Well until Buster started shaking the water off, and then we were wishing we had them on), and blow dryer (that was a disaster.  I turned it on for 5 seconds, and poor Buster did not like it one bit.  We quickly turned it off and went for the towel dry).

Davey was a great help. 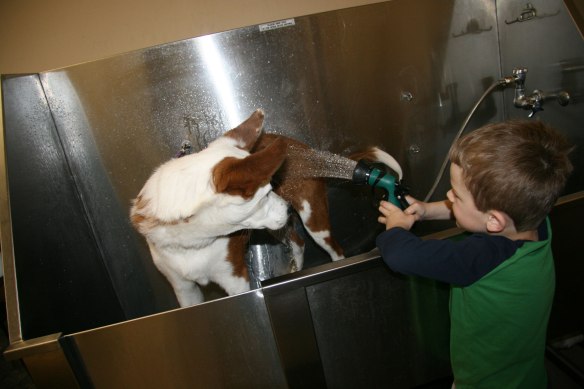 After we got Buster sprayed down, Davey helped scrubbed the shampoo in. Buster tolerated all of this really well. 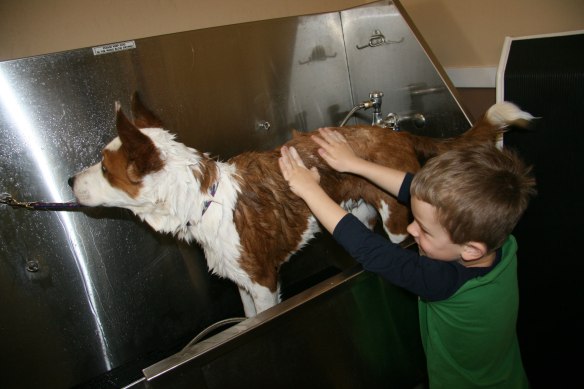 I think he kinda liked the warm spray although I’m not sure what kind of look he is giving Davey here. 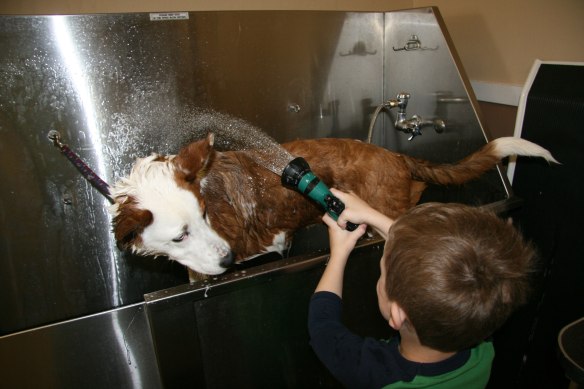 He finally had had just about enough I think.  To make matters worse, Davey had momentarily deserted him so he could play with another dog.  This didn’t make Buster too happy.  He looks rather forlorn here. 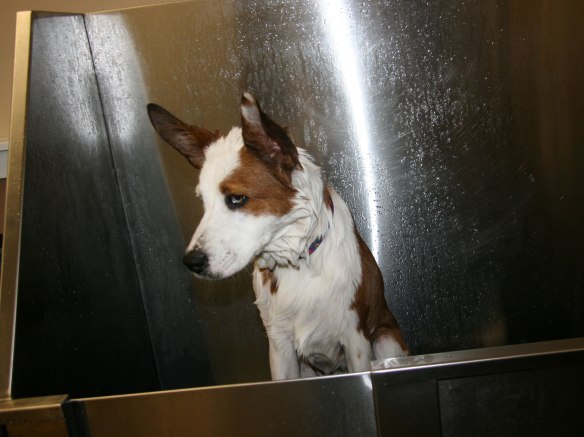 What a clean dog though.  Self-service dog wash – awesome way to go.

And then today Davey had soccer.  Davey really enjoys his soccer games.  He always hustles and tries, but he is as happy when a teammate scores as when he does.   Today I noticed Davey stopping to talk to a little boy from the other team.  It was right after Davey’s team had made a goal.  Davey and the little boy paused in the middle of the field, Davey talked to him for a second, and then I saw him shake the little boy’s hand.

When Davey came back over to us, I asked him why he had shook the little boy’s hand.  Davey said, “well he was sad that our team just made a goal, so I told him “good game” and shook his hand.”

Sweet boy.  I had to write that story down.

1 thought on “Buster’s First Bath and a handshake”