We went on a little hike today.  Might be the last chance we get to do that here in Colorado.

I discovered a new great website and corresponding app called Every Trail. It lists tons of trails all over the country.  I wanted to find a trail close to our house so I set the search for trails within 10 miles of Erie.

We found a trail in Superior called the Dirty Bismarck Loop.  I thought it was a cool name.  We had to try it!

We didn’t come near to walking the whole thing.  We maybe walked 3 miles.  Davey did great, and it was fairly warm out.  Buster loved it too.  Most of the trail was through the open prairie.  There was a warning sign at the beginning of the trail instructing us to beware of rattlesnakes.  Davey was ready to nix the trail at that point, but we convinced him it was highly unlikely that we would see a snake.  Thank goodness we did not.  I have a bit of a snake phobia, but I’d rather walk on a trail where there was the threat of rattlesnakes than a trail up in the mountains where there was a threat of a mountain lion watching my every move!

We read a picture book the other day about a little pioneer boy traveling across the Great Plains with his family.  Davey really got into this. So today, he pretended the entire time that we were pioneers making our way across the prairie.  Davey, Ma, Pa and Buster.

He can squat like this for a long period of time.  It amazes me.

It was a nice hike.  David got a family pic of us.  (Davey and Buster are gazing fondly at each other here.) 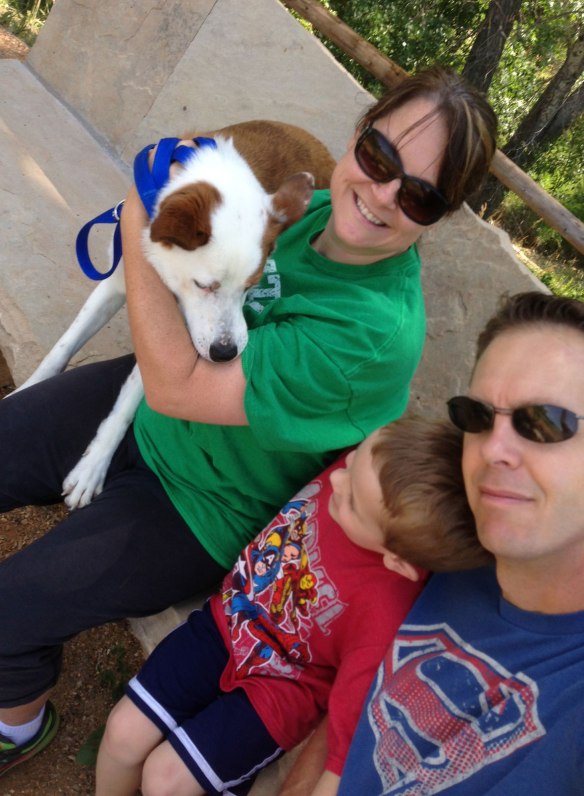 Then Tonight Davey helped me make some no bake cookies.  They are called “No Bake Energy Bites”, and I came across the recipe on facebook. Here’s the recipe.

Mix ingredients together in a large bowl. Roll into bite size balls. Refrigerate to set.

They are really tasty.  I added chia seeds to the batch I made tonight.  Davey liked helping me combine ingredients, but he is not too interested in eating the cookies.  David and I highly recommend them though!