I haven’t written a blog entry in over a month.  I have missed it!  My quarter is pretty much over, and so we are having a great not do too much weekend.  David is having an especially not do so much weekend as he has had a 101 fever for the last three days.  No fun!  But we are all getting in some nice relaxing.

Davey and I decided to try to make ice cream in a baggie last night.  I’d help prepare these in the kindergarten class I work in, but I wasn’t there to watch them shake the bags and to see the final result.

So Davey and I tried it.  We mixed the ingredients, double bagged them, and then put them in a gallon sized bag of ice and rock salt.

It took some shakin’!  In hindsight, I think I could have used a little more ice.

Davey was very enthusiastic at first. 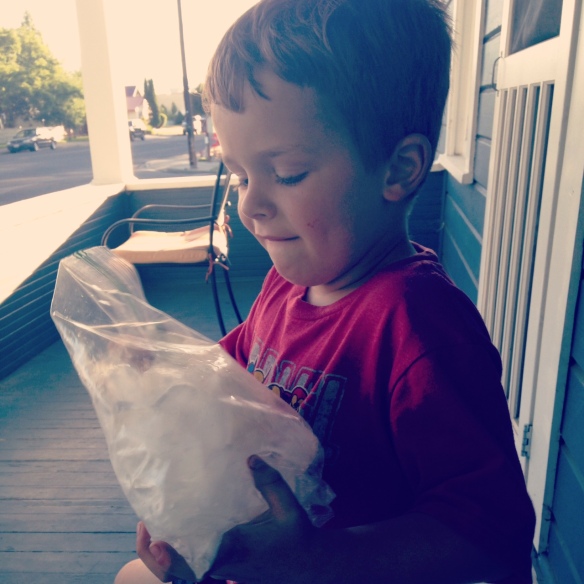 But then his enthusiasm began to wane.  It does require a lot of shaking; however, if you are patient, it happens!  The mixture turns to ice cream.  We finally got there and it was so neat!

Davey was a little hesitant to taste the ice cream (he is not a food adventurer).  He said, “this is good”, and then he said, “but it’s not the best ice cream I have ever had”.  I think there was a “no offense” quickly added at the end.

I thought it was really good though.  Big David was staying clear as he likes to eat ice cream in 30 seconds flat before there is any sign of melting.  This ice cream was melty for sure.

It was a fun Friday night end of the quarter activity though.

We sat down for a bit, and Davey enjoyed a hot dog.

I also sat on the porch and did some knitting today.  ahhhh.  It’s nice to be knitting again.  I went to the library and checked out a couple of books.  It was nice to read again.  And now, I am able to blog again.  I missed that too!

2 thoughts on “Time to blog”