I’ve been fascinated by weaving lately.  The other day I came across a picture where fiber had been woven into stems of lavender.  I kept going back to this picture, and I felt the need to give this a try.  We just happen to have lavender growing in our flower beds. Turns out I also just happen to have some yarn as well.

I had to think a little about the best way to approach this.  I decided to line up several stems of lavender on a piece of cardboard.  Taping down the stems somewhat messed up the aesthetic for me, but it was the most practical way that I could think of to begin. 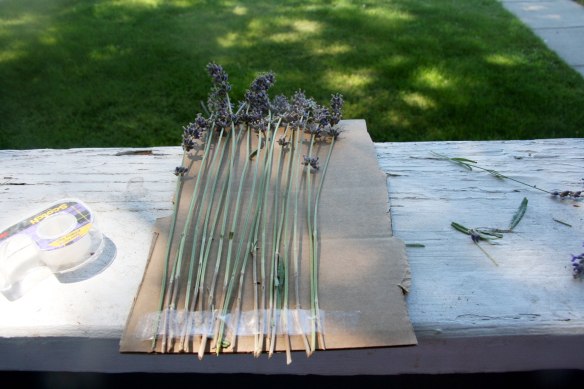 I have quite abit of Knit Picks Palette yarn from awhile back.  It’s basic wool and I have some colors I thought would work really well with the lavender. So after I got the lavender taped down, I started weaving.  I used a tapestry needle which worked really well.

I find knitting relaxing, but I think I find weaving equally relaxing.  It is very repetitive, but since I was working with the lavender, I had to pay attention as well.  I worried that I might break the stems, but they were very sturdy.  I had to pay attention to avoid catching the wool on rough spots as well.

I just changed colors whenever I felt the urge.

Not only was the weaving relaxing, but the scent of the lavender was nice too.  So I had the weaving combined with aromatherapy.  I’ve learned that lavender promotes calming and stress relief.  It may help cognitive performance as well.  I am all for that.

A lot of the fun for me is also to take pictures of my progress. 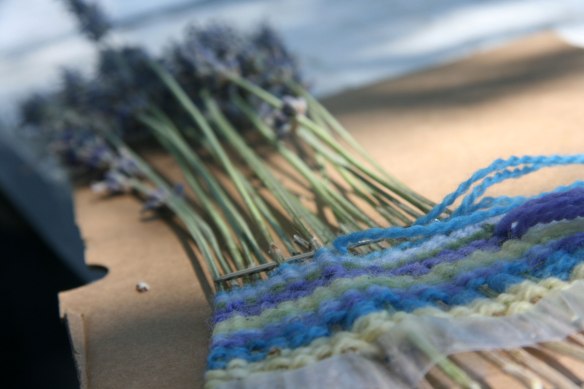 I wove until I decided I was done.

I decided that I needed to add one more color so I wove a little more.

I kinda think I didn’t need the extra color, but I decided to leave it.

I will try to recruit Davey and David to join me next time.  I’d love to see what design they’d come up with.  It would be great for building fine motor skills and we’d all feel very calm, content and cognitively boosted as well!

6 thoughts on “Lavender and Wool”