I’ve started a sweater for Davey.

I’ve never made him a sweater.  I started a couple, but one was absolutely huge, and the other had 8 million cables that were starting to drive me crazy.

I take that back.  I did knit him a really sweet little hoodie when he was about a year old.  I made this right after I started knitting again. 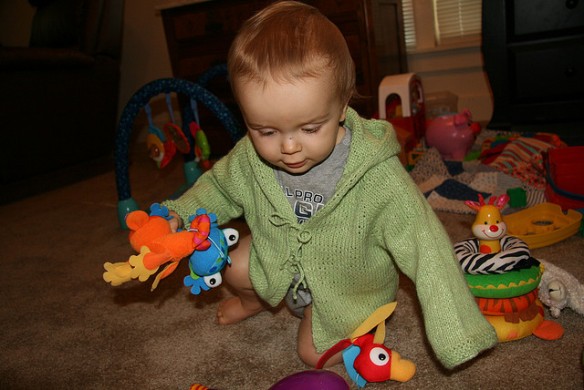 This time I am going to knit a Brooklyn Tweed pattern.  It’s called Wyatt, and I am knitting it with Ella rae superwash wool.

Davey helped me choose the pattern.  There are not an incredible number of patterns to choose from for little boys.  Most have some design element that is just a little much, or they have intarsia knit animals which Davey won’t go for. Luckily, there are several nice patterns in the new Brooklyn Tweed for Kids collection, and Davey seemed to really like this one.

Since I am knitting a sweater for a growing little boy, I really needed to knit a swatch.  I don’t know why I always fuss and act like a swatch is such a big deal.  It’s so not a big deal.

I knit a swatch in the main pattern stitch which is double moss stitch.  I really like this stitch.  It knit up really quickly, and then I washed it and dried it.  Creating a finished swatch makes me feel like a real knitter.

Trying to count the stitches in this swatch was a challenge.  The dark blue was really tough, and my eyes are not the greatest.  The fact that it was this double moss stitch did not make things any easier. I went outside into the bright sunshine so I could see what I was doing.  I had the swatch laid out on the grass so I could really see.  People driving by probably wondered what the heck that person was doing kneeling and looking intently at the ground.

My swatch was just about right on though.  I had gone down a needle size knowing that I am a fairly loose knitter.  It’s still a little loose, but it should work out fine.

I really enjoy Brooklyn Tweed patterns.  They are written so clearly.  This sweater has a “tubular cast on”.  I may have done this before, but I don’t remember it, so I will be headed to youtube to figure it out.

Hopefully this sweater will result in something that little Davey will enjoy wearing!

2 thoughts on “Wyatt for Davey”