Trying to decide what we should do today.  Lake for awhile?  River?  Waterpark later?  I guess the common denominator is clear.  Water.  We are growing weary of the heat.  However, I don’t want time to go by any faster.  At all.  So instead, I wish fall would start right now this very second on July 24.

I am almost done with the cuff of Rock-a-Bye Baby two.   Although I really like this pattern and the yarn,  I mentioned Second Sock-Itis.  My symptoms are impatience with second sock and the feeling that I have been knitting on it forever!   (although I really haven’t had too much time to knit – so that’s part of it.)

Last night we made the Chakchouka.  It turned out great.  I will definitely be making this regularly.  I found the recipe here.

First off, I have a whole new appreciation for food bloggers.  For example, the Pioneer Woman sets out her ingredients and then takes a picture.  Her shots are beautiful and inspire me to want to make everything she blogs about. I thought I’d play food blogger and try my own food shots.  It is not as easy as it looks. I had potatoes rolling around, my peppers wouldn’t stand up straight, and the ingredients just  looked like a big glob of stuff.  So I fell back to cute Davey studying the spices. 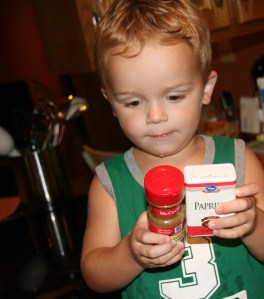 While I was peeling and chopping potatoes, peppers, onions, tomatoes, and garlic, Davey was playing with his “potato peel babies”.  (New favorite sink pasttime.) At one point, he told me:  “Mommy, please chop quieter.  My babies are sleeping.”

It’s a colorful mix of ingredients. 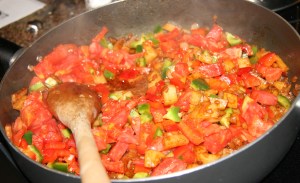 Then it all started to get all bubbly and mixy, and then I added the eggs.  (I think an egg on just about anything has to be good.)

We ate the Chakchouka on rice.  Davey raved about how he loves rice and sauce, but then he wanted no part of it.  I need practice on my food photography, but it really was delicious.  We won’t forget about Tunisia either. 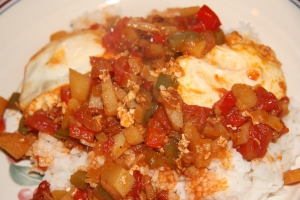 Now I need to figure out where we go next.