We had some snow the last couple of days, so today Davey, Buster and I went for a walk.  It’s pretty cold, but the sun was shining so we were ok for awhile.

Davey always loves the opportunity to throw a snowball at me. 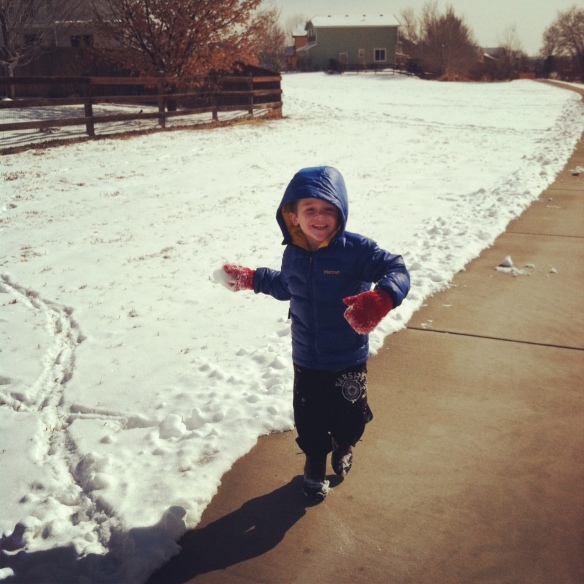 He was pretending some superhero something all down the trail.  It involved picking up snow and throwing it on the ground in a very “Hulk Smash”-like manner.

(I was cropping me and Buster out of the pic.  It’s hard to completely crop out those ears though!)

Buster is always wondering what Davey is up to.  They are pals for sure.

And then I was playing around again with trying to embellish the black fingerless gloves I made.  I tried sashiko, embroidered some little people, made some embroidered hearts and tried to applique them – then I pulled each attempt out.  It’s a wonder my gloves haven’t fallen apart.  So today I crocheted a little.  Davey liked my flower, but he said it needed “grass”.  So I chained a row of chain stitches and sewed them down around the wrist.  Davey was happy with the grass.  I kinda like this flower.  I really like that bright flowery embroidery, and this reminds me of that.  I may leave this decorative attempt intact.

I enjoy a little crochet here and there, but now I am back to a pair of socks I am working on.  Finished one yesterday, and I marched right into the second one – no hesitation! (Just a plain sock in a really pretty yarn from Debbie Macomber.  I had bought it back in Arkadelphia at the best yarn shop ever – Knit Unto Others.  I think it might be this yarn.  It’s really soft and knitted up really pretty.  I’ll have to post a picture soon.)

1 thought on “Walking in the snow and a little crochet”