We are the house of Harry Potter. We just finished reading the first book to Davey, and he loved it.  We had to tone down just a couple of parts so they wouldn’t be too scary, but overall the first book was really fun.

We are well into the second book now.  Davey is Harry, I’m Hermione and David is Ron (he began as Hagrid, but Davey re-dubbed him as Ron).  Oh yes, and Buster is Hedwig. Davey says, “Mama.  I don’t mind spoilers.  I want to know EVERYTHINGGGG there is to know about Harry Potter.”  Fortunately, I can’t deliver on too many spoilers, because I just don’t remember!  It’s been too long since I read the books.  I’ll remember this time.  We have discussed the first book thoroughly.

So today we pretended to have Potions class.  The potion we made was actually another Dollar Tree find:  a little sand art craft.  Davey and I carefully mixed up the potion which consisted of pouring sand slowly into the little plastic bottle. 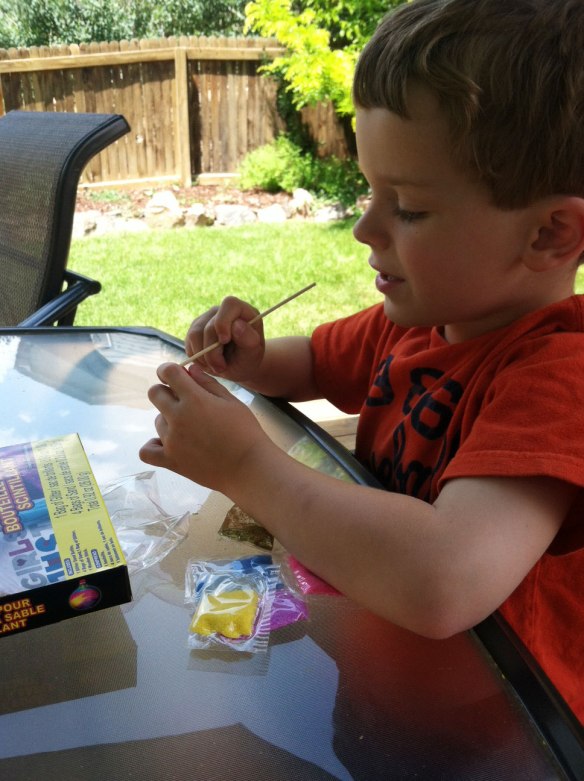 Davey very carefully mixed his potion.  Then he said he had to go show it to Professor Snape.  He already finds Snape to be quite a complex character, and he loves to discuss his relative “badness and goodness”.  Davey is convinced that he is more good.

This is the finished rainbow wizard potion.  Not quite sure of its magical purpose yet.