I finished them!  They turned out nice.  I wrote this before, but if I were to knit them again, I would definitely knit them on a smaller needle.  I used size 2.  I should have used  size 1.  But that’s just my gauge.  I am a kind of loose knitter I think.

So then I wanted to take pictures of them.  David has not yet gotten into photographing my knitted objects with any kind of creative flair, so I wanted to try to take the pictures myself.  I walked this morning and came home a sweaty mess.  I picked up my wool socks and went back into the 70% humidity and 90 degree temperature and sat in the grass to try to get a decent picture.  I tried holding up the camera in front of me and pointing at my feet.  I got silly results such as – Socks in the Wild:

I was having a hard time with the light. 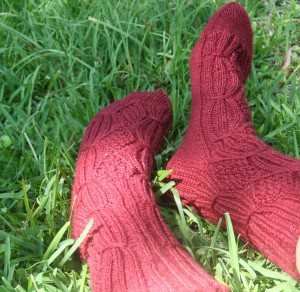 I took a few pictures inside too.  Actually this was when I had David’s assistance – but he was not thrilled with the junk in the background (which I tried to crop out as best I could): 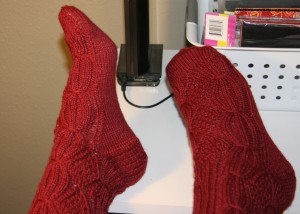 Ok so I am happy they are done!  Enough about them, and on to Two to Tango.  I keep looking forward through this sock book and there are just such a variety of sock patterns.  I get excited looking at them.   I am blocking out of my mind that there are “experienced” patterns which also call for Magic Loop which I have never done.  That’s for another day.

Abit about Davey.  He got a haircut today.  It’s very cute.  He went to the barber shop and he did just great.  Davey let the barber put the cape on him, and he held the lollipop, that David had bought him in advance, under his cape.  His hair was getting so long with cute little curls, but this will be much cooler.  It makes him look like a little boy though – which I know he is.

He played at the playground after that.  He didn’t seem too phased by the 70% humidity and 90 degree temps – well except for that little red face: 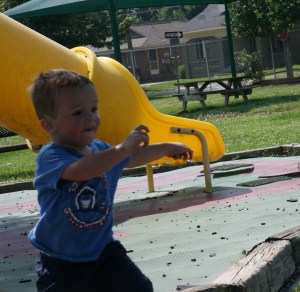